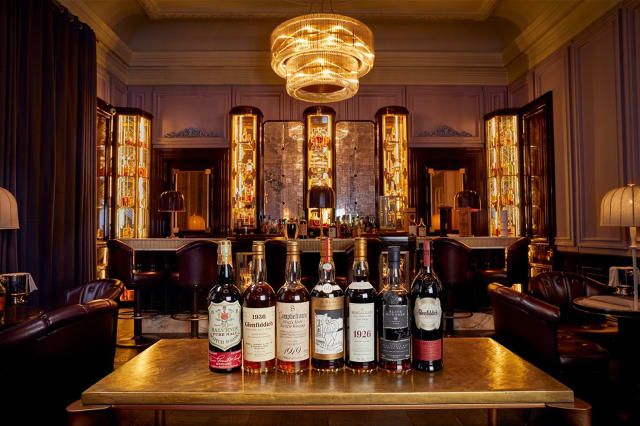 The first part of the sale of Richard Gooding’s Perfect Collection achieved  in excess of £3.2 million with the sale of more than 1,900 bottles, auctioneers said.

The sale through online auction house Whisky Auctioneer drew 1,642 bidders from 56 countries around the world.

Mr Gooding, a former PepsiCo bottling magnate, built up the collection over decades, regularly travelling from his home in the US to Scotland with his pilot to source special bottles at auctions and distilleries before his death in 2014.

He kept thousands of bottles in his own “pub” – a room in his family home in Colorado specially designed to display the collection.

Iain McClune, founder of Perthshire-based Whisky Auctioneer, said: “We always knew that The Perfect Collection by Mr Gooding could make whisky history but with auctions anything can happen.

“Not only was the highest ever sale price for Macallan 1926 Valerio Adami achieved at over a million dollars, Whisky Auctioneer became the first online whisky auction to sell a million-dollar bottle, with multiple other lots achieving hammer price world records.

He added: “Featuring show-stopping Macallan bottlings from the Lalique range, astonishingly rare and iconic bottlings including a lost distillery Old Orkney from Stromness Distillery – which set a record selling at 33,891 dollars (£26,000) with bidders battling it out in the final moments – as well as an Ardbeg 1974 Double Barrel reaching a hammer price of 27,705 dollars (£21,250).

“For me it is the diversity within the Perfect Collection that is perhaps the most exciting aspect.”

Other highlights include a bottle of the Macallan 1928 Anniversary Malt 50 Year Old, which achieved a hammer price of £92,000, breaking the previous record hammer price of £72,246 from October 2019.

All the prices exclude the auction house fees.

Around 2,000 bottles will be included in the second phase of the auction, which will take place from April 10-20.

Whisky expert Angus MacRaild, said: “The results were significant for two key reasons in my mind.

“Firstly, the top end hammer prices demonstrated clearly that, not only can the online auction model compete with the traditional auction houses with these kinds of bottles but in Whisky Auctioneer’s case it demonstrably outperforms them.

“Secondly, and of more interest and relevance to the wider whisky community, the prices were still largely driven by perceived quality of liquid and overall scarcity of each individual bottle.”

He added: “Prices were generally high but hundreds of beautiful, historic and superb old whiskies have found new homes across the world.

“Some will be kept but most will be opened and enjoyed sooner or later – something I’m sure Mr Gooding would have wholeheartedly approved of.”

Mr Gooding’s widow Nancy said previously: “It was clear to us as a family that collecting Scotch was one of Richard’s greatest passions – an endeavour that spanned over two decades.

“He loved every aspect of it, from researching the many single malt distilleries to visiting them and tasting their whiskies.”