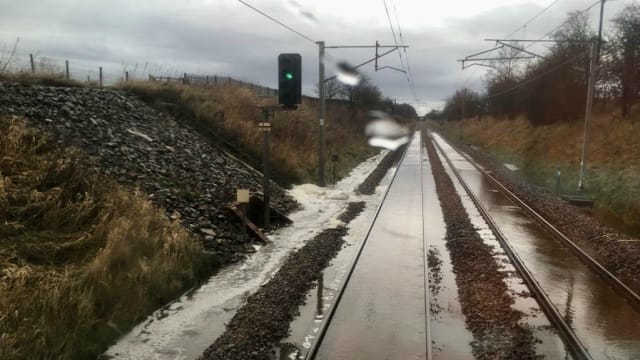 Rail passengers are being warned to expect further disruption due to more heavy rain.

Speed restrictions for trains are being introduced in Cumbria and north Lancashire as further downpours create an increased risk of landslips and flooding.

Delays of up to 30 minutes are expected as trains will be limited to 50mph between 5pm on Wednesday until 10am on Thursday on some routes.

This includes a section of the West Coast Main Line between Lancaster and Penrith, where Avanti West Coast trains normally run at up to 125mph.

Phil James, managing director of Network Rail’s North West route, said: “The railway has taken a sustained battering from both Storm Ciara and Storm Dennis this month, so we have to take the threat of more heavy rain really seriously.

“While I appreciate the speed restrictions will be frustrating for people, our number one priority has to be keeping passengers and our staff safe.

“We have extra teams on the ground at various locations across the region to deal with any disruption.

“Our temporary speed restrictions are a necessary safety precaution.”

Network Rail said it is working hard to repair and reopen lines affected by flooding in Wales, but some closures and disruption to Transport for Wales services remains.

Passengers are advised to check www.nationalrail.co.uk before travelling.

Network Rail’s route director for Wales and Borders Bill Kelly said: “We are continuing to work around the clock following the impact of the recent storms.

“Even in the current spell of significant rainfall, our teams will be doing all they can to reopen affected lines as soon and as safely as they can.

“I would like to thank passengers for their patience and understanding as we work to get the network back to capacity.”