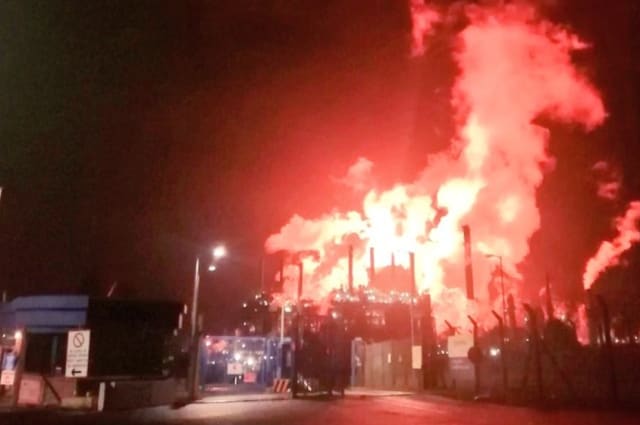 Around 100 workers at a Fife chemical plant have walked out over safety concerns.

The GMB Scotland union said the workers, understood to be mainly Bilfinger contractors, left the Mossmorran site on Wednesday.

The plant, which is restarting after closing last August, faced criticism after "intense flaring" at the site last week sparked alarm in the community.

Many residents took to social media to complain about the flares from the plant near Cowdenbeath, which could be seen for miles on Thursday night.

A GMB Scotland spokesman said: "Relations between the workforce and management have been deteriorating for some time.

"Workers have continuously raised their concerns about conditions and safety on-site but have frankly been ignored.

"You can't operate a major gas terminal this way and it shouldn't be beyond the capabilities of Exxon and their subcontractors to ensure workers feel safe and valued."

Exxon Mobil has been contacted for comment about the walkout.

It previously said the flaring last week was part of work to restart operations at the ethylene plant, which has been closed since last August for maintenance work.

In 2019, the company announced a £140 million plan to reduce flaring and improve infrastructure at the plant.

The Scottish Environment Protection Agency (Sepa) launched a formal investigation into unplanned flaring at the Mossmorran plant last April following hundreds of complaints from local residents about a chemical smell and rumbling noise.

In August, the regulator varied the operating permits for ExxonMobil Chemical Limited and Shell UK Limited, which share the site, requiring them both to address the impacts of flaring and install noise-reducing flare tips.

"This comes on a day when Sepa, which monitors the risk of pollution or environmental damage, has rated the site 'poor'.

"Mossmorran is an industrial relic and the front-line of our climate emergency challenge.

"Not only has the site been causing misery for the local community with unplanned flaring, now we hear staff are concerned about safety.

"This community faces an uncertain future, with no attempt to build sustainable alternative jobs in the area."

He added: "Neither ministers nor operators have engaged enough with this community.

"The plant must be made fit for a net-zero carbon Scotland or they must plan well ahead for closure.

"If the plant has to shut in the years to come, then discussions about what is next for this community need to start now."

Airline Norwegian hit by 61% fall in passenger numbers in March