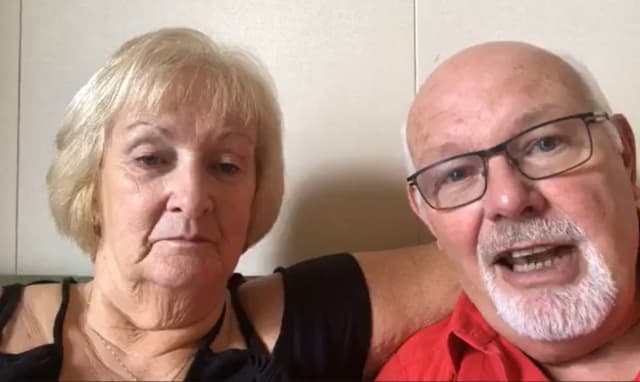 A British pensioner who has tested positive for coronavirus on board a quarantined cruise ship in Japan is also suffering from early onset dementia, his son has said.

Steve Abel, of Northampton, said his parents, David and Sally Abel, have confirmed that they have tested positive for the virus and have been told to stay in their cabin on the Diamond Princess.

It comes as the first passengers who tested negative for the new coronavirus began leaving the ship after 14 days in quarantine.

The Foreign and Commonwealth Office (FCO) has said that Britons on board the liner will be evacuated “as soon as possible”.

Mr Abel said his father has a number of medical issues.

He described him as an insulin-dependent Type 2 diabetic, who has a tooth infection, and was also diagnosed with early onset dementia a couple of years ago.

A clearly upset Mr Abel described it as a “very frustrating” situation for the whole family as he told BBC Breakfast: “They are just waiting. They have had their bags packed for over 24 hours now. They thought they were being taken yesterday but no-one came and there was no communication.”

“They are just being messed about. These are two old-age pensioners. They have been through so much and I just want someone to take care of them.

Mr Abel said his worst fear would be if his parents were separated because “with my dad’s early onset dementia … he could wake up and be a little bit confused, so my mum needs to be there with him”.

Reports from mainland China state that the number of deaths has now topped 2,000 but the rate of infection has slowed down.

There have been 2,004 deaths and 74,185 confirmed infections, according to the data.

New cases have fallen to less than 2,000 for the past two days, but officials and analysts have warned that the threat of a more serious outbreak remains as people gradually return to work following a prolonged Lunar New Year holiday.

Mr and Mrs Abel, who have posted regular updates on Facebook and YouTube, have confirmed that they have tested positive for the virus and it has now also been confirmed by an English-speaking doctor.

In a Facebook post on Wednesday, Mr Abel said: “We are going to hospital. We are both positive for the virus. It was very confusing yesterday when two doctors came to our door – neither could speak a word of English and pointed to our throat and said ‘You will be going to a hostel for four or five days’.”

He added: “We are going to a hostel because there isn’t a hospital bed anywhere around. In four or five days we will be removed from the hostel and put into a  hospital where we will receive treatment, so I can’t see in any way we are on that flight to the UK.”

The FCO spokesman said: “We are planning an evacuation flight from Tokyo to the UK as soon as possible for Britons who are on the Diamond Princess.

“We hope the flight will be later this week, subject to permissions from the Japanese authorities.”

The FCO also announced that some passengers had been allowed to leave the ship.

“However there is a chance that people who disembark will not be able to join the evacuation flight.

“We have the utmost concern for the affected Britons and strongly encourage them to register for the evacuation flight.”

Hundreds of passengers began leaving the Diamond Princess on Wednesday.

Some passengers said on Twitter that they received health check forms asking if they had symptoms such as a headache, fever or coughing.

Passengers who tested negative for coronavirus and had no symptoms still had to have their body temperature checked before leaving.

Japan’s health minister told reporters on Tuesday that all passengers still on board had been tested and had samples taken for the coronavirus illness, also known as Covid-19.

Katsunobu Kato said those who had tested negative would start leaving the ship, which had 74 Britons on board, on Wednesday.

He said: “They all want to go home as early as possible, and we hope to assist them so that everyone can get home smoothly.”