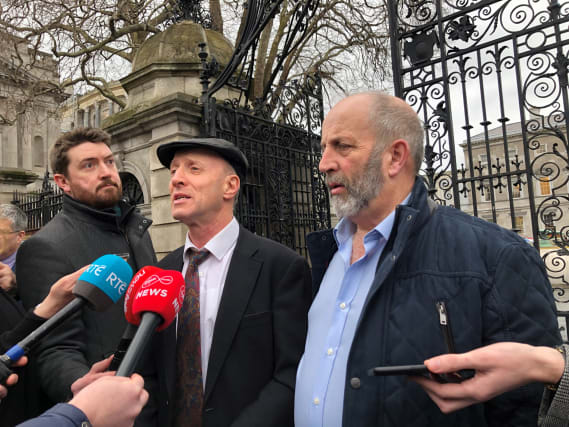 Independent TDs Michael and Danny Healy-Rae have hailed a positive meeting with Sinn Fein but questioned how they will fund their election promises.

It comes ahead of the first sitting of the 33rd Dail on Thursday where TDs will be asked to vote on who will become the next Taoiseach.

The leaders of the largest parties – Fianna Fail, Fine Gael and Sinn Fein are expected to be among those nominated, although no candidate commands a majority of support in the Dail.

The two TDs from Kerry who are brothers met with Sinn Fein at Leinster House as talks aimed at forming a government intensify.

Speaking after the meeting, Michael Healy-Rae said: “A lot of Sinn Fein’s policies sound fine but who pays for it and where does the money come from? These are important questions.”

Mr Healy-Rae said they discussed Common Agricultural Policy funding for farmers, housing and health with Sinn Fein and wanted information on their costings.

“We discussed a lot today but we wanted to get down to the nitty-gritty around how these things will be paid for, how it will be financed and where will the money come from.

“There is no such thing as a free lunch, somebody has to pay for it.

“We will speak to them again in the future but today, we were speaking to them as two individuals from Kerry.”

When asked if they were satisfied with Sinn Fein’s costings, Mr Healy-Rae said: “We got a lot of answers but we have a lot more questions that need to be answered and we are hoping for questions to be answered in the coming weeks.”

Danny Healy-Rae said he felt assured Sinn Fein was interested in rural Ireland and the issues that concern them.

Solidarity TD Paul Murphy said: “Fine Gael leader Leo Varadkar has said he wants to lead the opposition. We are saying to Fine Gael and Fianna Fail and we think other parties like Sinn Fein and the Greens should tell them if you are serious about that, then get out of our way and let an alternative government be formed on a minority basis.”

People Before Profit TD Richard Boyd Barrett said: “We sent the same message to Sinn Fein that we intend to send to the Social Democrats. We intend to pursue a left government to give effect to the demands for change that were clearly made by the electorate and to radically drive through the changes we need on health and the climate.

“Sinn Fein said while they are keeping open the option of a left minority government, they are also keeping open options that might include Fianna Fail. For us, that is just not on. We do not believe the mandate for change can be delivered with any government involving Fianna Fail or Fine Gael.”