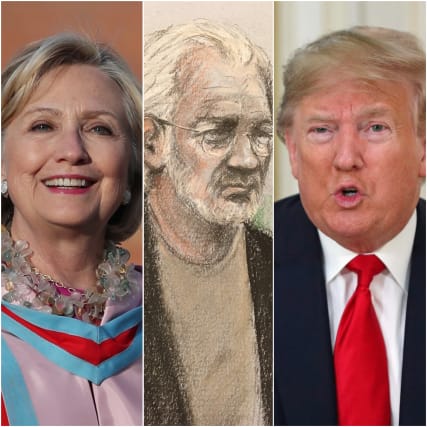 Donald Trump offered WikiLeaks founder Julian Assange a pardon if he said Russia was not involved in the leak of Democratic National Committee emails, a court has heard.

The claim emerged as Assange, 48, appeared at Westminster Magistrates’ Court ahead of an extradition hearing next week.

His barrister Edward Fitzgerald QC highlighted evidence alleging former US Republican Congressman Dana Rohrabacher had been to see Assange, while he was still in the Ecuadorian embassy in August 2017.

He said a statement from Assange’s lawyer Jennifer Robinson shows “Mr Rohrabacher going to see Mr Assange and saying, on instructions from the president, he was offering a pardon or some other way out, if Mr Assange… said Russia had nothing to do with the DNC leaks”.

A series of emails embarrassing for the Democrats and the Hillary Clinton presidential campaign were hacked before being published by WikiLeaks in 2016.

Assange is wanted in America to face 18 charges, including conspiring to commit computer intrusion, over the publication of US cables a decade ago.

He could face up to 175 years in jail if found guilty.

The extradition hearing is due to begin at Woolwich Crown Court on Monday, beginning with a week of legal argument.

It will then be adjourned and continue with a three weeks of evidence scheduled to begin on May 18.

The decision, which is expected months later, is likely to be appealed against by the losing side, whatever the outcome.

Assange appeared in court on Wednesday by videolink from Belmarsh prison, wearing dark tracksuit bottoms and a brown jumper over a white shirt.

He spoke to confirm his name and date of birth, and sat holding a stack of papers during the hearing.

The hearing came after Australian MPs George Christensen and Andrew Wilkie called on Tuesday for Boris Johnson to intervene and stop the extradition hearing.

Shadow chancellor John McDonnell is expected to become the first British MP to see Assange behind bars in a visit to Belmarsh on Thursday.

At a press conference on Tuesday it emerged that fellow inmates at the high-security prison successfully lobbied for his release from solitary confinement.

Speaking after the press conference, Assange’s father John Shipton said his son’s condition had improved, but said the extradition going ahead would be akin to a “death sentence”.