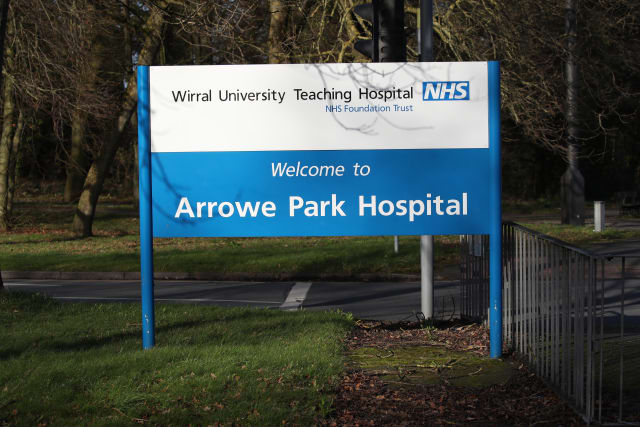 Britons due to be repatriated from a coronavirus-stricken cruise ship in Japan will be quarantined in NHS accommodation for 14 days.

The Foreign and Commonwealth Office (FCO) has said that British passengers of the Diamond Princess cruise liner will be evacuated “as soon as possible”.

The FCO is organising a repatriation flight from Toyko to the UK, which it hopes will go ahead later this week.

It is unclear whether it is only people who test negative for the new coronavirus, known as Covid-19, who will be allowed to board the flight.

Those on board will be taken to Arrowe Park Hospital on the Wirral once they return to the UK.

A spokesman for the Department of Health and Social Care said: “We can confirm that an accommodation block on the Arrowe Park NHS site will be used to isolate those returning from the Diamond Princess Cruise Ship in Japan.

“They will be kept in this location for the 14-day quarantine period, with around-the-clock support from medical staff at all times.”

He added: “There is no risk to the public, and the hospital will continue to run as normal.”

More than 70 British nationals are passengers but it is unclear how many will be repatriated.

In a letter to staff, Wirral University Teaching Hospital NHS Trust said: “Following the successful management of two previous groups of repatriated British citizens, from Wuhan in China, Arrowe Park has been asked to host the Britons from Japan and look after them throughout their quarantine period.

“We are still waiting for final confirmation of how many will be joining us but we wanted you to be aware of the situation as soon as we could.”

It comes as the first passengers who tested negative for the new coronavirus began leaving the ship after 14 days in quarantine.

But the Foreign Office warned that people who disembarked may not be able to join the evacuation flight.

One of the passengers who has tested positive is a British pensioner who is also suffering from early onset dementia, his son has said.

Steve Abel, of Northampton, said his parents, David and Sally Abel, have confirmed they have tested positive for the virus and have been told to stay in their cabin on the Diamond Princess.

Mr Abel said his father has a number of medical issues.

He described him as an insulin-dependent Type 2 diabetic, who has a tooth infection, and was also diagnosed with early onset dementia a couple of years ago.

A clearly upset Mr Abel described it as a “very frustrating” situation for the whole family as he told BBC Breakfast: “They are just waiting. They have had their bags packed for over 24 hours now. They thought they were being taken yesterday but no-one came and there was no communication.”

“They are just being messed about. These are two old-age pensioners. They have been through so much and I just want someone to take care of them.”

In a Facebook post on Wednesday, Mr Abel senior said: “We are going to a hostel because there isn’t a hospital bed anywhere around. In four or five days we will be removed from the hostel and put into a hospital where we will receive treatment, so I can’t see in any way we are on that flight to the UK.”

Reports from mainland China state that the number of deaths has topped 2,000 but the rate of infection has slowed down.

There have been 2,004 deaths and 74,185 confirmed infections, according to the data.

New cases have fallen to less than 2,000 for the past two days but officials and analysts have warned that the threat of a more serious outbreak remains as people gradually return to work following a prolonged Lunar New Year holiday.