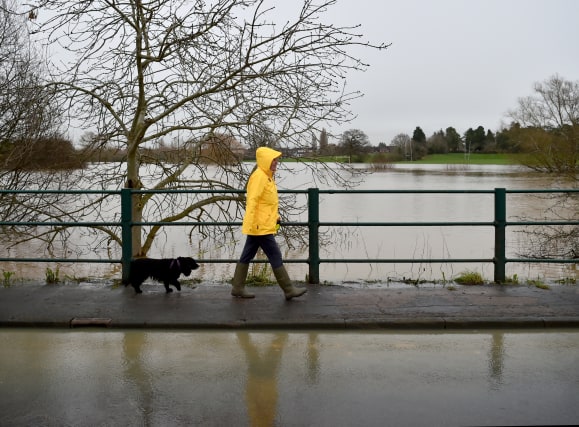 Experts have warned the weather for flood-hit communities will get worse before it gets better in the aftermath of Storm Dennis.

The Environment Agency (EA) said there were 112 flood warnings in place for England late on Wednesday night, including six severe warnings posing a danger to life close to the Welsh border.

More rain is set to fall overnight in Wales, northwest England and southwest Scotland on Thursday morning before conditions begin to improve in the afternoon.

Roads have already been forced to close and hundreds of people have been evacuated from their homes in the worst-affected areas.

Met Office meteorologist Mark Wilson said: “The rain is particularly affecting northwestern parts of the UK, where some of the rain is quite heavy and many areas will see rain overnight and into tomorrow.

“Gradually through tomorrow the rain will clear its way away from the UK, but before that happens we’re talking about quite a bit more rain in places.

“There will be some heavy winds and then something a bit brighter but colder with some showers around.”

Mr Wilson added: “A lot of places are very sensitive after recent rainfall and, unfortunately, there is more rain to come. There’s no real sign of things settling down weather-wise.”

The Met Office has issued warnings for heavy rain in Wales, southern Scotland, and northwestern England for Thursday.

The village of Capel Curig in north Wales received 36.2 mm of rain in 12 hours on Wednesday, compared to an average of 97 mm of rain for the whole of February.

The EA said England had already received 141% of its average February rainfall so far this month, adding that river levels in the Colne, Ribble, Calder, Aire, Trent, Severn, Wye, Lugg, and Derwent all set new records in recent days.

Mr Wilson added that conditions are set to improve for those hit hardest by flooding as the heaviest rain moves away from the worst-affected regions.

He said: “We do have more warnings in force after Thursday’s rain but they’re in slightly different areas of the country, south-west Scotland and parts of Yorkshire.”

The Met Office said no other storms have been named, despite reports of an incoming “Storm Ellen”.

Meanwhile, figures have revealed that one in 10 new homes in England have been built on land at a high risk of flooding.

Data from the Ministry of Housing, Communities and Local Government shows that 9% of new houses built between 2017 and 2018 were built on land with at least a one in 100 chance of annual river flooding, or a one in 200 chance of sea flooding.

Meanwhile, fundraising efforts have continued for those affected by the floods, with multiple communities in Wales starting collections.

On Wednesday, Good Omens actor Michael Sheen launched a campaign to raise money for affected communities in Wales, raising half of its £10,000 goal within the first five hours.

The latest weather comes as Labour leader Jeremy Corbyn condemns Prime Minister Boris Johnson for failing to visit areas affected by flooding ahead of his own visit to South Wales on Thursday.