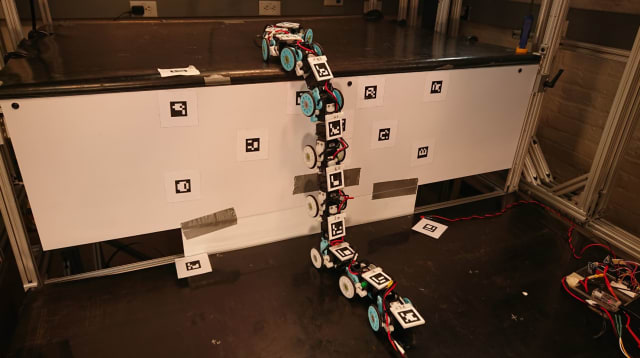 A snake robot has been developed by scientists in the race to advance the creation of search and rescue machines.

Snakes live in diverse environments ranging from hot deserts to lush tropical forests, where they slither up trees, rocks and shrubbery every day.

It is thought that snake robots may some day help in the exploration of inaccessible terrain, such as building rubble after an earthquake.

Scientists observed how the serpents moved and used this information to make a snake robot that can climb large steps in a nimble and stable fashion.

Senior author Chen Li, an assistant professor of mechanical engineering at The Johns Hopkins University, said: “We look to these creepy creatures for movement inspiration because they’re already so adept at stably scaling obstacles in their day-to-day lives.

“Hopefully our robot can learn how to bob and weave across surfaces just like snakes.”

Previous studies had mainly looked at snake movements on flat surfaces, but rarely in 3D terrain except for on trees.

Prof Li said these did not necessarily account for real-life large obstacles such as rubble and debris that search and rescue robots would have to climb over.

“These snakes have to regularly travel across boulders and fallen trees – they’re the masters of movement and there’s much we can learn from them,” he explained.

Through a series of experiments, the study published in the Royal Society Open Science journal found the snakes partitioned their bodies into three sections.

Their front and rear body wriggled back and forth on the horizontal steps like a wave, while their middle body section remained stiff, hovering just so, to bridge the large step.

Scientists noticed the wriggling portions provided stability to keep the snake from tipping over.

If the steps got taller and more slippery, the snakes would move more slowly and wriggle their front and rear body less to maintain stability.

Using this information, the team created a robot to mimic the snakes’ movements.

They say that compared to snake robots from other studies, their creation is more stable than all but one and even came close to matching an actual snake’s speed.

Prof Li said: “The animal is still far more superior, but these results are promising for the field of robots that can travel across large obstacles.”