Seven-year-old with cancer becomes police officer for a day 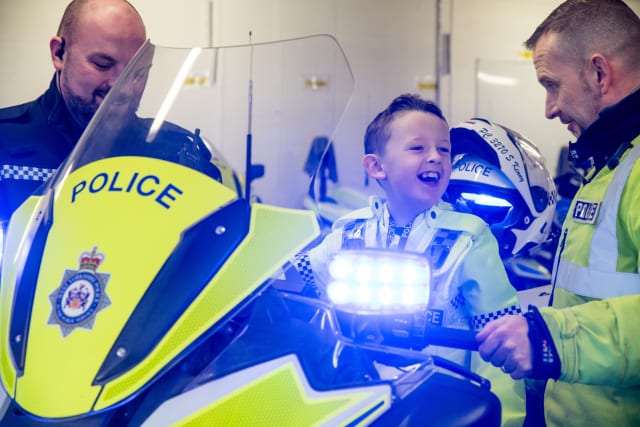 A young boy with cancer became a police officer for the day thanks to Make-A-Wish.

Seven-year-old Allan Harris from Swansea, who has a soft tissue tumour in his stomach called rhabdomyosarcoma, told charity volunteers he would love to spend a day in a police station.

So the foundation organised for him to spend the day at West Yorkshire Police’s training and development centre working on a special operation codenamed Avenger.

Allan was kitted out with his own uniform and given a police escort as he travelled to the centre in Wakefield.

Once there he was given a taste of life in the force as he was shown how to dust for prints and put handcuffs on a suspect, before the operation began in earnest.

Video posted on Twitter by one of the officers involved showed Allan helping to raid a house, face down a riot and having a go on a police motorbike.

And after Allan arrested the crooks, he was given a special presentation to mark his work.

Afterwards he described the day as “absolutely brilliant”.

Make-A-Wish UK chief executive Jason Suckley said: ”We have recently experienced a significant increase in the number of children turning to us for a wish – around 1,700 between July and November last year alone.

“Our greatest challenge is to reach every one of these children. We can’t do this alone so we’re hugely grateful to the police community for their help in creating such an amazing experience for Allan.”