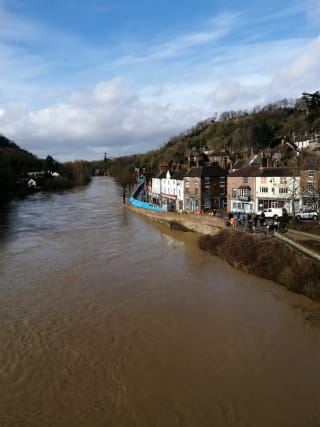 Dozens of people evacuated from their homes in a Shropshire town amid serious flooding employed the “Dunkirk spirit” as they took shelter in a cocktail bar.

Some 30 properties were evacuated on the Wharfage in Ironbridge near Telford on Tuesday morning as a danger to life warning was issued, with the temporary barrier there expected to be overtopped as the River Severn continues to rise.

Residents, including a number of elderly people, as well as council workers and people trying to help amid flooding took refuge in Cleo’s cocktail bar in the town which opened specially.

Owner Mike Perks, 65, said he had as many as 40 people in at the busiest point to take shelter and refuel with complimentary teas and coffees.

“We’ve got people drinking teas and coffees and having bacon sandwiches and everything else – the old Dunkirk spirit,” he said.

He said he had even served a few pints of Guinness to workers “who have been going for hours and hours and hours” as they tried to secure the town against flooding.

Mr Perks, who is a Shropshire local and has run the bar since last April, said while flooding is a regular occurrence in the area this year’s water levels were “exceptionally high” and described seeing lorry-loads of sandbags being used to try to prevent further damage.

“Some of the places on the opposite side of the river are completely underwater,” he said.

“There’s a house down at the bottom that they think is completely ruined now.

“There’s a lot of people here that have had their gardens ruined, their deck chairs have gone, their outside facilities have gone.

“But I think most people are now getting used to it.”

Police have also advised people in Severn Terrace, Riverside and local caravan parks in Bridgnorth to evacuate and said roads in Shrewsbury town centre are likely to continue to be affected by floodwater in the coming days.

Chief Superintendent Tom Harding from West Mercia Police said: “We know some people want to stay in their homes but we would really ask that for their own safety they find alternative arrangements.

“The levels could remain high for a few days and while they are fine now the situation could change rapidly. Not only are they risking their own safety but the safety of emergency services who ultimately could have to rescue them.”

Mr Perks said police had gone to speak to residents to urge them to leave their houses on Tuesday afternoon.

“A lot people are of older age so their house is their castle, and it’s very difficult,” he said.