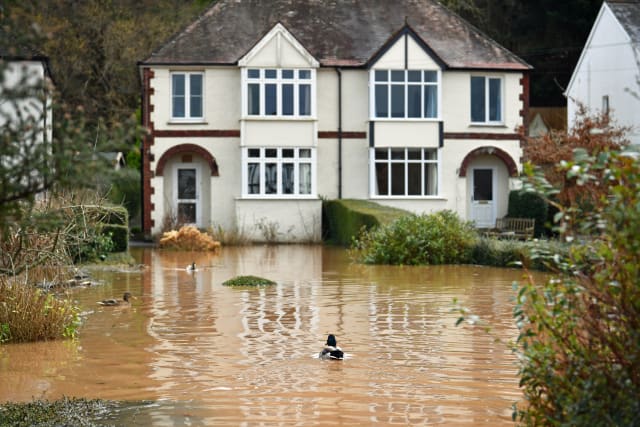 People are being urged to leave their homes in the face of further flooding as one official warned residents are “not out of the woods yet” in the aftermath of Storm Dennis.

Police have advised residents in affected areas of Shropshire they are risking their own safety and that of the emergency services if they choose not to evacuate their properties after the Environment Agency (EA) said flooding was “potentially imminent” on Tuesday afternoon.

There were 10 severe flood warnings in place at one point across England and Wales, and warnings of continued problems amid a forecast of more heavy rain forecast later in the week

Communities across the country are counting the cost of the weekend’s storm, which has left hundreds of properties flooded, and Prime Minister Boris Johnson has faced criticism for not visiting affected areas.

The latest warning, for the River Severn in Telford, prompted the evacuation of about 30 properties as water pressure caused the road surface to crack and levels threatened to overtop the barrier.

Residents of the Wharfage, located along the river, were being taken to a cafe on the High Street in Ironbridge while 21 cars parked in the area were taken to a nearby park and ride to save them from flooding, Telford and Wrekin Council said.

The council said the river’s flood peak was moving towards the Ironbridge Gorge and was expected to arrive there later on Tuesday while the Environment Agency said river levels could reach 22ft (6.7m) by the afternoon.

EA manager for Herefordshire and Worcestershire Dave Throup, who has said the level of flooding leaves affected parts in “uncharted territory”, added that water is at “exceptionally high levels” around Ironbridge and Bridgnorth.

Chief Superintendent Tom Harding, from West Mercia Police, said: “We know some people want to stay in their homes but we would really ask that for their own safety they find alternative arrangements.

“The levels could remain high for a few days and while they are fine now, the situation could change rapidly. Not only are they risking their own safety but the safety of emergency services who ultimately could have to rescue them.”

The River Wye reached its highest levels on record on Monday, peaking at around 20ft (6m), with residents in Hereford saying they had never seen anything like it.

Meanwhile, the River Trent, which had prompted a severe flood warning for Burton-on-Trent, also peaked at record levels of just below four metres on Tuesday.

The family of Yvonne Booth, who was swept away by floodwater near Tenbury in Worcestershire on Sunday, said they had been left “devastated” after her body was found on Monday.

The 55-year-old, from the Great Barr area of Birmingham, was described as a “very much loved member of our family” in a statement from relatives, released through police.

In Wales, there are two severe warnings in place on the River Wye at Monmouth in what Natural Resources Wales called both “defended” and “undefended” areas.

A residential park in Monmouth was evacuated on Monday and the organisation said the river had gone above seven metres by Tuesday morning.

The Prime Minister has resisted calls to chair a meeting of the Government’s emergency committee Cobra to tackle the flooding crisis.

Shadow environment secretary Luke Pollard, who has said it was a “disgrace” that Mr Johnson had “refused” to visit affected communities, said the Government’s response to the flooding “hasn’t been good enough”.

He told BBC Radio 4’s Today programme: “If we are to protect communities and give those communities that are currently underwater more reassurance, I’m afraid government’s going to need to have a more comprehensive strategy than what we’ve seen to date.”

Around 1,000 staff have been on duty, with more than three miles (5km) of flood barriers deployed and 90 pumps in action, the EA said.

Further heavy rain is forecast in the north of England for Wednesday and Thursday, possibly falling on already flooded areas.

The Met Office has issued yellow weather warnings for snow and ice over parts of Scotland, with further warnings of persistent rain in Wales and the North West of England for Wednesday and Thursday.