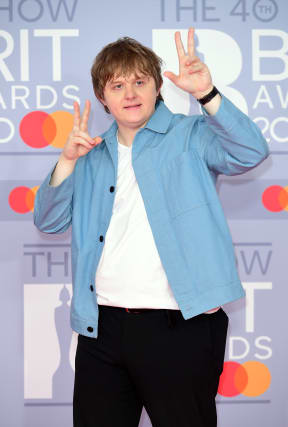 The Someone You Loved singer has been nominated for four gongs at the ceremony, including male solo artist and album of the year, and many have predicted a clean sweep.

Neneh Cherry’s daughter Mabel, who opened the show at the O2 Arena with an energetic performance of her song Don’t Call Me Up, said it was “an honour” as she was presented with the female solo artist prize.

“It’s been a crazy journey and I just want to say that there are so many amazing women in this category so it’s really an honour to have this.”

Grime star Stormzy thanked the women in his team after collecting the male solo artist award.

He said: “To be the best male, I have got the most incredible females in my team.

“You lot are the greatest, the best male is nothing without the best females. I love you guys.

“To every single person who supported me, I love you. Thank you guys.”

After winning the international male solo artist award, Tyler, The Creator made fun of former prime minister Theresa May, who he said had previously stopped him entering the country.

He said: “Thank you Theresa May.

“I know she’s at home pissed off.”

He also paid tribute to the UK music scene, saying: “Shout out to all the British funk from the 80s that I try to copy.”

The ceremony is being hosted by Jack Whitehall, who paid tribute to Caroline Flack, who he said was “a member of the Brits family” during his opening monologue.

He said the Love Island presenter, who was found dead on Saturday having taken her own life, was “a kind and vibrant person with an infectious sense of fun”.

“She will be sorely missed,” he said.

“I’m sure I speak for everyone here when I say our thoughts are with her friends and family.”