Homes under threat from flooding as river levels continue to rise 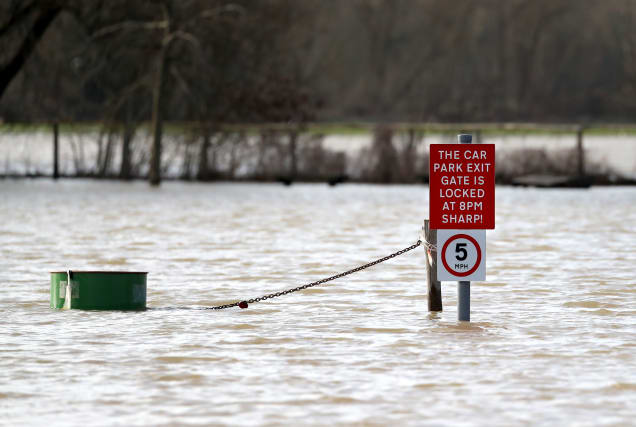 Homes remain under threat as river levels threaten to breach flood barriers, and more misery is expected with further heavy rain forecast to fall on already affected areas of the UK.

Hundreds of properties have been flooded as a result of lashing rain which battered the UK during Storm Dennis and caused rivers to reach record levels.

The Environment Agency (EA) has warned that levels on the Rivers Wye and Severn will remain especially high into the weekend, after both broke records this week.

The River Severn was continuing to rise, threatening homes and properties in the Midlands, with fears barriers would be overtopped.

Residents in the Shropshire towns of Ironbridge and Bridgnorth were urged to evacuate their properties, and warned if they failed to do so they could be putting their own lives and those of the emergency services at risk.

Chief Superintendent Tom Harding, of West Mercia Police, said: “We know residents want to stay in their homes and understand it is an inconvenience for them to leave, but it really is in their best interests to do so.”

The force also warned residents in Bewdley near Kidderminster that flood barriers at Beales Corner might not be able to withstand the rising water levels.

Superintendent Mark Colquhoun said: “We expect that some properties will be at risk of flooding, particularly if the Beales Corner barrier is ‘out-flanked’.”

The EA said 599 properties had been flooded across England as of Tuesday afternoon, as a result of the weekend’s storm.

More than 6km of temporary flood barriers have been erected across the country and flood defences have protected nearly 25,000 properties from the impacts of the storm, the agency said.

But record-breaking river levels and continued rainfall means further flooding is possible across much of the country, EA executive director of flood and coastal risk management John Curtin said.

“We expect further disruptive weather into tomorrow and Thursday, bringing a significant flood risk to the West Midlands, and there are flood warnings in place across much of England.”

The Met Office has issued yellow weather for persistent rain in Wales and the north-west of England for Wednesday and Thursday, and the north of England on Friday into Saturday.

In Monmouth, mountain rescue teams evacuated an elderly man from his home on a flooded road by breaking down his back door with a sledgehammer and taking him to safety on a raft.

Other neighbours on the A466 ventured to a nearby Lidl supermarket on canoes to pick up their food shopping.

Meanwhile, drinking water supplies were hit after a treatment works in Monmouthshire flooded.

Welsh Water asked people in Monmouth to reduce their usage.

Meanwhile, the River Trent, which had prompted a severe flood warning for Burton-on-Trent, also peaked at record levels of just below four metres on Tuesday.

Severe flood warnings remained in place for the River Severn at Upton upon Severn, Ironbridge and Uckinghall, the River Wye and the River Lugg at Hampton Bishop on Tuesday afternoon.

In Wales, there were two severe warnings in place on the River Wye at Monmouth in what Natural Resources Wales called both “defended” and “undefended” areas.

Storm Dennis claimed the life of Yvonne Booth, from the Great Barr area of Birmingham, who was swept away by floodwater near Tenbury in Worcestershire on Sunday.

Prime Minister Boris Johnson has faced criticism from the Labour Party for not visiting communities affected by flooding.

The RSPCA said it has responded to more than 200 emergencies during Storm Dennis, including a pony which had been trapped in a flooded field beside the River Wey in Guildford.

Rescuers brought the pony, which they have named Jemima Puddle Duck, to safety by accompanying her on a tethered swim.

A former wildlife officer has also warned that the extreme wet weather has flooded many low-lying badger setts in North Wales and damaged the structures of those on high ground.

Mal Ingham, who used to work for Wirral Council and has monitored local wildlife for over 30 years, said the conditions will have a “tremendous impact” on the animals.