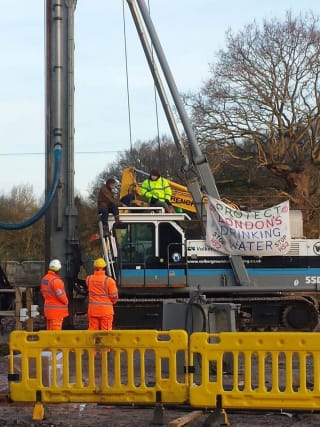 The pair climbed on to the roof of the vehicle, which includes a newly-arrived 100ft drill, and unfurled a banner reading “Protect London’s Drinking Water: Stop HS2”.

They have food and supplies to last for several days and have said they have no intention of coming down unless removed.

Mr Brown, a former Paralympic cyclist, was accused of causing a public nuisance in October after he glued himself to a British Airways plane at London City Airport.

He and his fellow activist, named only as Jimmy, said they aim to prevent HS2 from potentially contaminating London’s drinking water.

Speaking immediately prior to occupying the drill, Mr Brown said: “We’ve got to do whatever we can to halt work if possible. We’ve got to slow this thing down, ultimately just make it too hard for them to continue.

“Once they drill into that, there’s a lot of toxins and waste in the surrounding environment that’s going to go straight into the water supply and poison it, and that’s going to affect 20% of London’s population – that’s 3.2 million people.

“They can maybe treat the water, add more chemicals to it. But, at a time when clean water’s in short supply and is only going to get worse, we ought to be respecting our natural means of water filtration and clean water. We’re going to need it.”