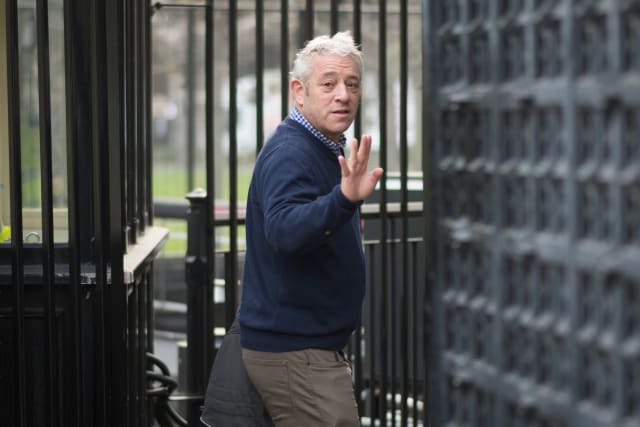 John Bercow’s protests about bullying claims against him have been described as a “desperate attempt to divert attention” away from the allegations, according to one of his chief accusers.

The former Commons speaker used a publicity event this week to describe parliamentary staff members who have alleged he bullied them as “snobs and bigots”.

But Lieutenant General David Leakey, who served as Black Rod for six years between 2011-2017, said the allegations had been aired by “respected” ex-parliamentary officials.

The former British military commander has called for Mr Bercow, who is lobbying for a peerage after standing down in October, to allow the inquiry into his behaviour to “take its course in private”.

He told the PA news agency: “In his latest denunciation of people John Bercow calls the ‘snobs and bigots’ apparently out to get him, the former Commons speaker is thrashing around in an increasingly desperate attempt to divert attention from the very serious allegations of bullying made against him.

“These allegations have been put forward by a number of respected former parliamentary officials – figures who are unlikely to make vexatious complaints and who might therefore present as credible witnesses for the inquiry that will now take place into the allegations against the former speaker.

“Now that Parliament has set up an independent and effective process for investigating allegations of bullying, Mr Bercow should allow that process to take its course in private, and confirm that he will fully cooperate with that inquiry.”

Lt Gen Leakey, who helped uphold Parliament’s security and day-to-day running as part of his Black Rod duties, has formally complained about the former Conservative MP’s behaviour while in office, and has accused him of presiding over a “toxic culture” in Westminster.

Lord Lisvane, who was clerk of the Commons for three years during Mr Bercow’s decade-long tenure before becoming a crossbench peer in 2014, has also filed a formal complaint about him to the Parliamentary Commissioner for Standards.

Due to MPs opting to grant anonymity to those being investigated, the commissioner Kathryn Stone has been unable to declare whether she has started an investigation into Mr Bercow.

Other bullying allegations have been filed by Angus Sinclair, Mr Bercow’s former private secretary, who has confirmed he has passed information to an independent helpline for current and former House of Commons staff.

Lt Gen Leakey said his reason for speaking out was to encourage more whistleblowers to come forward in a bid to expose wrongdoing in Parliament.

“My own motivation for speaking out about the bullying culture of Parliament, now acknowledged by Mr Bercow’s successor, Sir Lindsay Hoyle, is not driven by snobbery or bigotry, as Mr Bercow suggests,” he added.

“I simply wish to see an end to that toxic culture, exposed by the independent inquiry led by Laura Cox QC, over which speaker Bercow presided for so long.”

Mr Bercow, at an event in central London on Monday, dismissed accusations levelled against him that he frequently lost his temper.

“I make no apology for the fact that I fought my corner.

“But the idea I was some sort of raging bull … has no credibility at all,” he said, according to The Guardian.

He came under fire from Commons authorities recently after he named staff who had “never spoken publicly about their experiences” in his memoirs, which were published earlier this month.

The 57-year-old has argued it is customary for those retiring as Commons referee to be given a place in the House of Lords, an elevation the Government has yet to agree to after Mr Bercow was accused of plotting against Downing Street during its bid to push Brexit through the Commons.