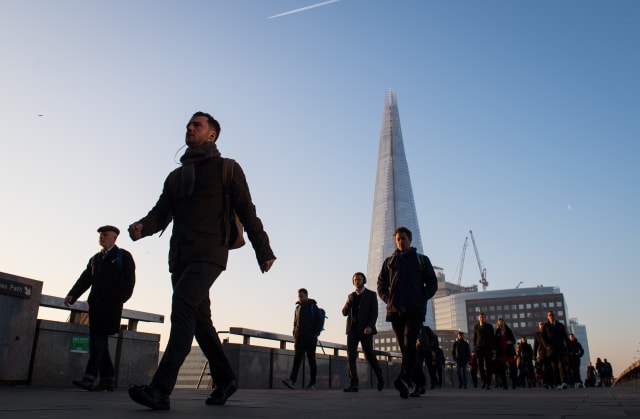 However, the increase in employment came as wage growth continued to stall over the period.

The surge in employment resulted in the highest figure on record and was higher than analysts had predicted, with a rise of 160,000 initially forecast.

The ONS said the figure was boosted by a “strong” rise in the number of women in full-time work, with an increase of 150,000 women in work for the quarter.

Myrto Miltiadou, ONS deputy head of labour market statistics, said: “Employment has continued its upward trend, with the rate nudging up to another record high.

“In particular, the number of women working full-time grew strongly over the past year.”

Meanwhile, unemployment also decreased during the period, falling by 16,000 to 1.29 million.

The labour market also showed signs of improvement as job vacancies returned to growth for the first time in 11 months, rising by 7,000 to 810,000 for the quarter to January 2020.

However, wage growth continued to stall, slipping below analyst expectations, as bonuses fell.

Total earnings increased by 2.9% in December, slowing from 3.2% growth in the previous month.

Economists had forecast growth of 3% for the month.

Mr Miltiadou added: “In real terms, regular earnings have finally risen above the level seen in early 2008, but pay including bonuses is still below its pre-downturn peak.”

In the quarter to December, the ONS also recorded the largest increase in EU-born workers in the UK since March 2017, rising by 133,000 to 2.44 million.