Blue tits ‘engage in promiscuous mating based on past encounters’ 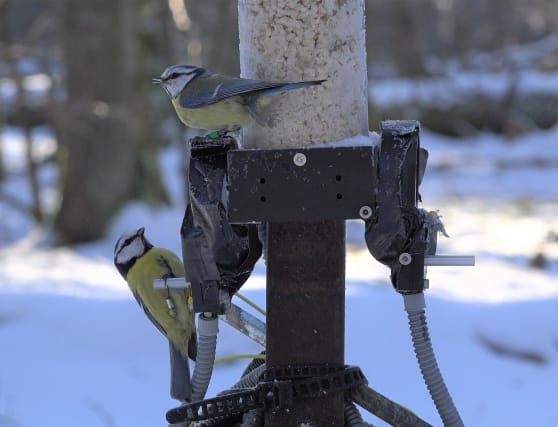 Blue tits will engage in promiscuous mating which is not random but shaped by past encounters, research suggests.

When it comes to breeding season and couples settle down, those extra-pair birds who had previously foraged together wind up establishing nests nearby, thereby predisposing them to extra-pair coupling.

Scientists found that birds which often foraged together in the colder months were more likely to end up as breeding pairs or partners outside of their couple.

They say many socially monogamous bird species engage in sexual behaviour outside their pair bond, often resulting in chicks.

But despite years of research, the ability to say which birds are likely to have young away from home has been limited.

Now researchers of the Max Planck Institute for Ornithology have examined whether social associations prior to breeding season influenced patterns of social and extra-pair mating.

They studied blue tits that typically form monogamous pairs, but frequently mate outside their pair.

First-author of the study, Kristina Beck, said: “As most extra-pair sires are close neighbours, one could think that extra-pair paternity in blue tits might simply be the result of coincidental meetings between neighbours, and not a social preference for specific mating partners.”

About half of all nests contain at least one young with a genetic father other than the social one, and up to 15% of all offspring are sired by extra-pair males.

According to the study, published in Proceedings Of The Royal Society B: Biological Sciences, during winter blue tits forage in large mixed-species flocks where they potentially already meet future mating partners.

Scientists installed a self-designed, custom-built automated monitoring system including 20 feeders and 277 nest-boxes in their forest study site in Southern Germany.

Blue tits in the study area carried a tiny Passive Integrated Transponder (PIT-tag) with an individual code activated externally by the scanning device in the feeder or nest-box.

This enabled scientists to monitor the date, time, and identity of every PIT-tagged bird visiting.

They used this data to create a social network that shows which birds hang out together and how often.

Thirty-nine per cent of the birds present in the study site in winter bred in the subsequent spring.

Nearly all social breeding pairs were formed by the individuals present during winter and those that foraged more often together were also more likely to end up as breeding pairs.

The social network analysis further suggests that individuals that are more strongly associated during winter tend to nest closer together.

“However, our research provides new insights into the dynamics of different types of social relationships.

“Our work shows that extra-pair mating often happens between individuals that already know each other.”