Badgers ‘reluctant’ to leave setts in wake of Storm Dennis 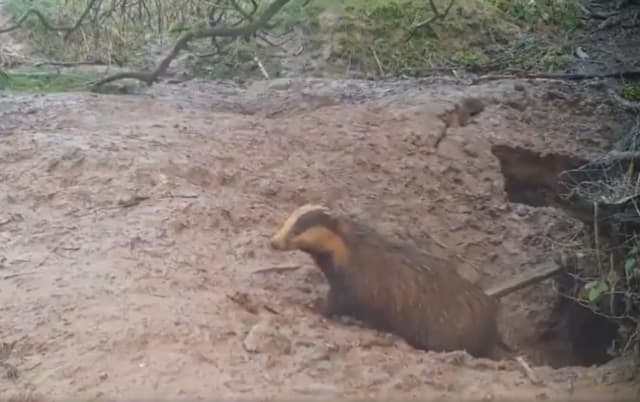 It is not just humans that are dealing with the fallout from Storm Dennis, local wildlife is also feeling the effects of the deluge.

The extreme wet weather has flooded many low-lying badger setts in North Wales and damaged the structures of those on high ground.

Mr Ingham, who has been monitoring local wildlife for over 30 years, says that the conditions will have a “tremendous impact” on the animals.

“Normally wet weather is good for badgers, it actually helps them find food,” he told the PA news agency.

“But this sort of weather where it’s torrential and constant, it drowns badgers even though they’re good swimmers.

“If they’re trapped underground they will drown.

“I hate to think how many setts have been completely flooded out.”

Recent footage posted on his Twitter page shows a muddy badger emerging from its partially collapsed sett, and a sow moving her tiny four cubs to another burrow due to the weather.

He said that other wildlife such as foxes and otters may find it more difficult to find food, but will be less affected as they do not keep permanent homes.

Badger setts, however, often “stay in the family” and can be up to 200 years old.

“Setts can vary massively in size, even though a section may collapse, they can move into other parts, these badgers aren’t going to move,” he said.

“They are very reluctant to abandon their homes.”

He added that despite the weather he was optimistic about the animals’ situation.

“Badgers are survivors,” he said.

“Undoubtedly this sort of weather does have a very detrimental effect on them.

“We will have lost a lot of animals but badgers will survive.”