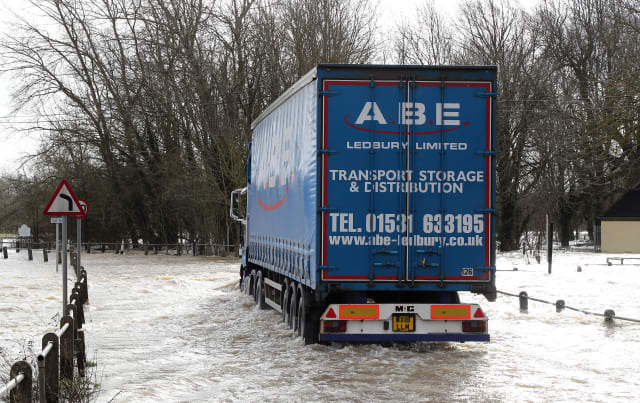 The UK’s transport network has been hit by a third day of disruption due to Storm Dennis.

Heavy rain over the weekend caused flooding which blocked a number of roads and rail lines.

More than 90 flights at Heathrow were cancelled on Monday due to the knock-on effect of what the airport described as a “technical issue”.

This came after hundreds of flights were cancelled at airports across the UK due to the bad weather on Saturday and Sunday.

RAC Breakdown spokesman Rod Dennis warned that the impact of Storm Dennis “will be felt by drivers for some time yet”.

He said: “Aside from the current road closures, with so many flood warnings still in force, there is a very real risk more roads will be affected by flooding over the next few days.

“It’s vital drivers take no risks – if they can’t be sure the water is shallow enough to safely drive through, turning around and finding another route is always the best option.”

Trains from Swindon towards Bristol Parkway were unable to run.

No services could operate through Mitcham Junction in south London as the electric third rail was switched off due to flooding.

Rotherham Central station was closed until at least Tuesday due to flooding.

A fault with the signalling system in the Welwyn Garden City area also caused major disruption between Stevenage and London King’s Cross.

A Network Rail spokesman said: “Just as with Storm Ciara last weekend, Storm Dennis has had a significant impact on the railway.

“The heavy rainfall, combined with already waterlogged ground conditions, has led to flooding in a number of areas across the network.

“Our engineers have been working in extremely difficult conditions throughout Sunday and overnight to clear the tracks and keep passengers moving.

“The majority of services are now running as scheduled, but we do still urge anyone travelling over the next couple of days to check before they travel at www.nationalrailenquiries.co.uk.”

Nearly one in five British Airways flights due to arrive at Heathrow on Monday were cancelled as the airline recovered from the airport’s systems failure which led to long queues and handwritten flight information being displayed on whiteboards on Sunday.

At least 61 arrivals and 33 departures were grounded on Monday.

British Airways is the largest airline at Heathrow.

More than 100 flights by several airlines were cancelled at the airport on Sunday, due to a combination of the technical glitch and Storm Dennis.

A British Airways spokeswoman said: “The technical issue with Heathrow Airport’s systems has now been resolved but, after 10 hours of disruption across all terminals, we do expect to see a knock-on effect to today’s short-haul schedule.

“We’ve introduced a flexible booking policy and have brought in extra colleagues to help our customers get on their way as smoothly as possible.”

A Heathrow spokesman said: “Following yesterday’s technical issue, Heathrow’s systems are stable and the airport is operating as normal.

“We apologise for the inconvenience this caused our passengers.”