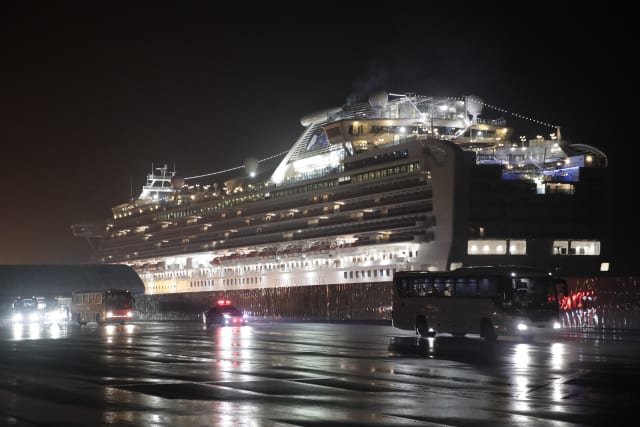 More than 70 British nationals stranded on a coronavirus-hit cruise ship are waiting to find out if they will be evacuated after the Government indicated they could be flown home.

A Number 10 spokesman said on Monday those on board the Diamond Princess, which is docked in Yokohama off the coast of Japan, were being contacted about the possibility of a repatriation flight.

It comes as the Foreign and Commonwealth Office (FCO) is attempting to contact British passengers who had travelled on another cruise ship, the Westerdam, after a female guest tested positive when she left the vessel.

The FCO has faced pressure to fly home the 74 Britons on the Diamond Princess after the US chartered two planes and repatriated 340 of its citizens.

On Monday, the Japanese Health Ministry confirmed 99 more people on board have been diagnosed with the illness, bringing the total to 454.

Four Britons with confirmed coronavirus are currently in hospital in Japan, according to the latest official figures.

A Number 10 spokesman said: “We sympathise with all those caught up in this extremely difficult situation.

“The Foreign Office is in contact with all British people on the Diamond Princess, including to establish interest in a possible repatriation flight.

“We are urgently considering all options to guarantee the health and safety of those on board.”

It comes after Sir Richard Branson said Virgin Atlantic was “in discussions” with the Government over whether he could help those stranded.

He responded via Twitter to an appeal from David and Sally Abel, who are among those who have been trapped in their cabins for days, who asked the British businessman and philanthropist to charter a special plane.

The couple’s son David Abel renewed appeals for the Government to help his parents, who he fears may become separated in Japan.

Both are still awaiting the results of their own tests for Covid-19.

Princess Cruises president Jan Swartz said the firm has worked with authorities to send more doctors and nurses on board the ship and has helped fulfil 2,000 prescription requests.

However, there is still uncertainty over whether passengers will be able to leave the ship at the end of the 14-day quarantine period on Wednesday.

The Government is currently tracing British passengers who were on board Holland America’s Westerdam cruise ship, which is reported to have carried more than 100 passengers from the UK.

All passengers were allowed to disembark on Friday, when there had been no confirmed cases on board at the time.

A female guest, reported to be American, has since been diagnosed with Covid-19 in Malaysia.

It is understood that the FCO is not aware of any British nationals who travelled on the cruise ship who have been diagnosed with the virus.

An FCO spokeswoman said: “Our staff are providing consular assistance to British nationals in Cambodia who have travelled on the Westerdam cruise ship and are working with the operator to establish contact with those who have recently disembarked.”

Meanwhile, the Government has block-booked the Holiday Inn Heathrow Ariel hotel as a potential quarantine zone for international visitors to the UK who develop coronavirus, or for Britons evacuated from overseas.

As of Monday afternoon, 4,501 people in total have now been tested for Covid-19 in the UK, of which nine have come back positive.

Public Health England (PHE) has published guidance saying that no restrictions or special control measures are needed while tests for Covid-19 are carried out on a suspected case.

If a case of the virus is confirmed, then health protection teams would trace those at risk.

Nine people in the UK have tested positive for Covid-19, with eight of those patients now discharged from hospital.