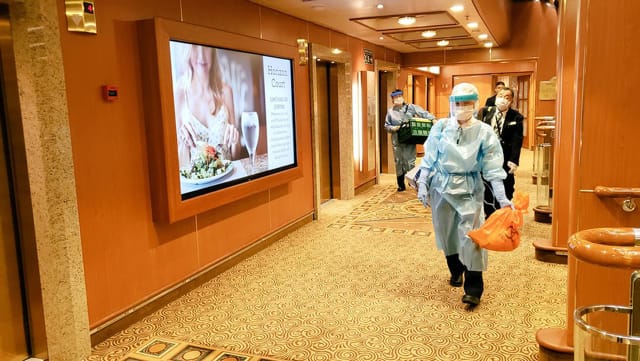 The son of a British couple stuck on board the quarantined Diamond Princess cruise ship has renewed appeals for the UK Government to help his parents.

Steve Abel appeared in a video posted from his father’s YouTube channel and admitted that his “greatest fear” was that his parents would become separated in Japan.

Throughout the video he displayed a white piece of paper reading “Mum and Dad are fine!” but said that his parents were beginning to feel the effects of living in quarantine for an extended period of time.

“Please bear in mind they’ve been on that cruise ship for 28 days. They’re getting pretty fed up and they are the way they are because of the stress, the confinement within the cabin,” he said.

Mr Abel said that he couldn’t see the point of giving television interviews as a “concerned son” but asked the authorities to give his parents more information.

“This is my plea: I want my mum and dad to wake up in the morning and actually have some information sent to them – they need to be communicated with,” he said.

“They must be going crazy as it is just being inside that cabin.”

Mr Abel said that he was extremely concerned that his parents would be separated abroad.

“My greatest fear is if they’re separated. If they’re not both on a flight home,” he said, becoming visibly emotional. “But we’re not going to think like that because they’re coming home.”

He added that his entire family wanted to send “a global thank you” to everyone who had supported his parents through their ordeal.

“From the bottom of my heart, and my brother and my sister and wife… all the family here, we want to thank you for keeping their spirits up. I really believe it’s got them to where they are now,” he said.

“We’re going to look back on this and well, we’re not going to laugh, but we’re going to think ‘that was a good life experience – we’ve learnt something’, hopefully.”