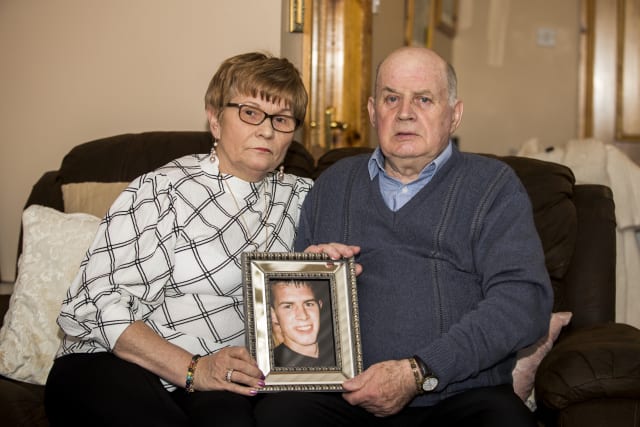 A woman who blamed the IRA for beating her son to death has claimed Sinn Fein has put her through hell.

Breege Quinn’s son Paul was attacked in Co Monaghan in the Irish Republic in 2007.

After the murder, Sinn Fein powersharing minister Conor Murphy said Mr Quinn was a criminal. He has withdrawn the remarks and apologised to the family.

Ms Quinn said: “He has … put our family through hell.”

She and her husband Stephen visited Stormont on Monday to meet politicians including the SDLP and Ulster Unionists.

She added: “Conor Murphy does not have a mandate to criminalise people he is supposed to represent.

“He does not have a mandate to call our son a criminal.

“We are once again calling on him today to say the simple words that Paul Quinn was not a criminal.”

Mr Murphy said he spoke to the IRA in South Armagh about the killing.

Ms Quinn asserted: “He must also go to the PSNI and the gardai to give the names of the IRA men he spoke to in Cullyhanna.

“He must stop providing political cover for murderers.”

The killing became one of the talking points in the Irish election as Mr Quinn’s mother called for the former Newry and Armagh MP to be removed from his post as a minister over the comments.

Sinn Fein faced criticism from its political rivals over its response to the killing.

On Monday, Ms Quinn said: “It must not be okay for any elected representative to call anyone a criminal and be rewarded with ministerial office time and time again.

“It should not be okay for a minister to seek assurance about a crime from a paramilitary group that has supposedly gone away.”

She added: “I hope Conor Murphy is listening so that we can move attention back to the men who killed our son Paul and who are walking freely around Cullyhanna and Crossmaglen while our son is buried in the ground.”

Sinn Fein leader Ms McDonald said the investigation by the PSNI and Garda into the murder of Mr Quinn is ongoing and there is no suggestion Mr Murphy has not disclosed information on his murder.

“The PSNI and the Gardai are perfectly capable of seeking out and speaking to any individual that they need to speak to. They don’t need my prompting or anyone else’s.

“Conor has made it plain that he did speak with the police and authorities at the time of this awful murder and I think it’s important to say this. There is no suggestion of an involvement by Conor covering up for anything.”