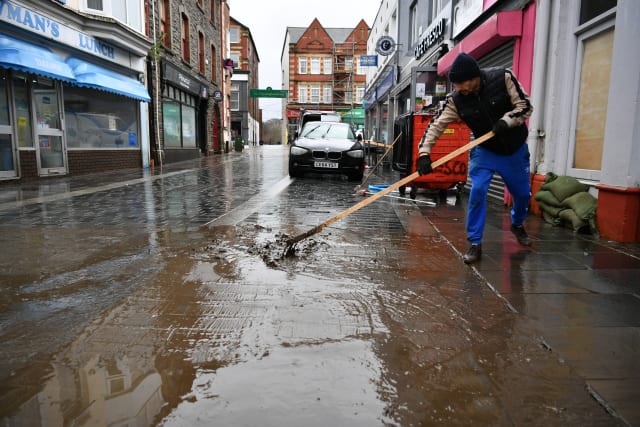 Plaid Cymru leader Adam Price criticised the Welsh Government’s level of investment in flood defences during a visit to people affected by the flooding.

Mr Price spoke to residents in the village of Trehafod, near Pontypridd, whose homes were flooded by sewage water and the overflowing River Rhondda.

The politician visited the local community centre where residents were being given food and drink by volunteers.

He told the PA news agency: “We are not investing at the scale that is necessary.

“Our weather is changing, the fact people can’t even get flooding insurance in some parts of Wales reflects that.

“The fact some people I’ve spoken to today have been flooded for the third time suggests this is becoming an ever more recurrent pattern and as a result of that we absolutely do need to review the level of investment that we’re putting into our flood defence systems because it clearly isn’t adequate to the scale of the challenge we’re facing.

“Every time this happens it’s an additional wake-up call because clearly the flood defence infrastructure is not sufficient to the task.”

Mr Price said he would be asking questions of the Welsh Government whether the country should have a Cobra-style national emergency response system, particularly for flooding disasters to coordinate emergency responses across all public authorities.

He added: “Sadly I don’t think this is going to be the last case where communities are facing such an incredibly disastrous repercussion of flooding emergencies.”

“People have been left without a home to go to. The high street has been left devastated.

“The town will need a lot of support to recover from the devastation of the floods.

“We’ve all been pulling together. I’ve been out helping residents get temporary accommodation, food and shelter.

“We’re all ready to pull together but we need more help and support from the council and the Welsh Government.”

Eleri Griffiths, Plaid Cymru county councillor for Rhondda ward, added: “My patch of Trehafod has seen the worst impact of the storm.

“We’re urging people to stay indoors and travel only if necessary. We’ve been working flat out to find emergency accommodation for people.

“The community has been brilliant and we’ve all been working together.”