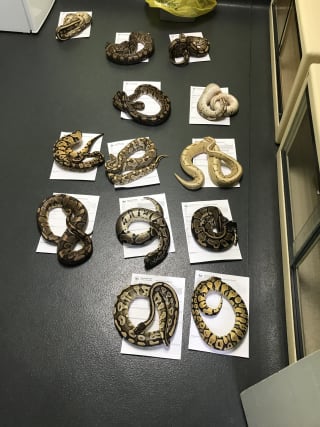 A second nest of 16 snakes has been found dumped outside a fire station, just days after 13 royal pythons were found in the same spot.

The reptiles were all found abandoned in pillowcases outside Farringdon fire station in Sunderland.

The first nest of 13 royal pythons was found on Thursday, and one snake has already died.

On Saturday, a further 15 corn snakes and one male carpet python were found abandoned in two pink pillowcases, inside a bin behind the station.

The snakes were rescued by RSPCA inspector Heidi Cleaver and taken to the vets.

Ms Cleaver said: “I couldn’t believe it when the call came through to say there had been even more snakes found in the exact same spot.

“These snakes had been left inside the bin so they were incredibly lucky they didn’t end up in the landfill.

“It is really concerning to think that someone has had around 30 snakes or more which they have decided to abandon in this cruel and callous way. We were in the midst of Storm Dennis at the weekend when these snakes, who need heat and light in order to survive, were left outside in the cold with just a pillowcase to contain them.

“It would have been very stressful for the snakes to be in such close proximity to each other as well.”

Snakes are unable to produce their own body heat so they rely on their environment to maintain their body temperature.

If a snake becomes too cold it may be unable to feed or move normally, and their immune system will not work properly to fight disease, meaning the animal can become very ill.

The RSPCA is appealing for information from anyone who might know about the snakes.