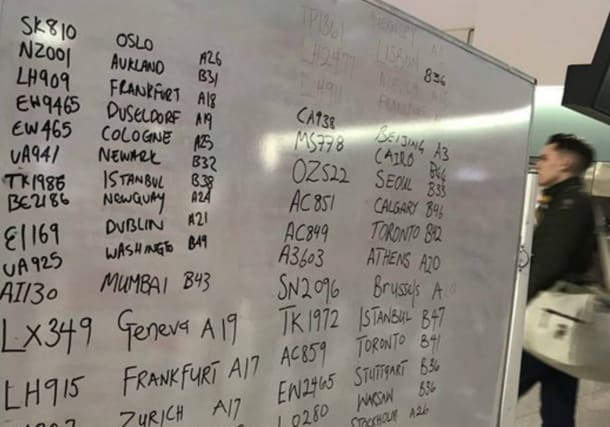 Flights to and from Heathrow continue to be disrupted after the airport was hit by a "technical issue".

At least 58 of the day's arrivals – equivalent to 9% – were cancelled due to the knock-on effect of the problem, which emerged on Sunday.

A further 30 departing flights were also grounded from what is the UK's busiest airport.

All the flights affected on Monday were operated by British Airways, which is the largest airline at the west London hub.

On Sunday, some 73 departures and 60 arrivals from various carriers were cancelled.

Heathrow apologised for the disruption and said extra staff had been drafted in to help with directing people to their gates.

The situation at the airport on Sunday was described on Twitter by one passenger as "utter chaos".

She said: "Computer systems down at Heathrow. No electronic tickets allowed, delays & no flight information on screens ... Oh Blighty."

A Heathrow spokesman said: "Following yesterday's technical issue, Heathrow's systems are stable and the airport is operating as normal.

"We apologise for the inconvenience this caused our passengers.

"Our teams continue to closely monitor our systems and will be on hand across our terminals to provide assistance to passengers."

A British Airways spokeswoman said: "The technical issue with Heathrow Airport's systems has now been resolved but. after 10 hours of disruption across all terminals, we do expect to see a knock-on effect to today's short-haul schedule.

"We've introduced a flexible booking policy and have brought in extra colleagues to help our customers get on their way as smoothly as possible."