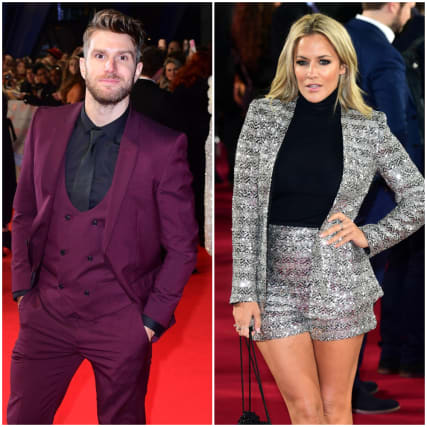 Joel Dommett paid an emotional tribute to Caroline Flack during a fundraising gig for a mental health charity.

The Masked Singer host said he had spoken to the TV presenter just weeks before she was found dead at the age of 40 at her home in east London on Saturday, after taking her own life.

However, he said she had not replied to a message he had sent her on Thursday.

Flack, who was described as “vulnerable” by her management, had pleaded not guilty to assaulting her boyfriend Lewis Burton at her former flat in north London in a court hearing in December.

He added: “I just wanted to talk about it with you because I didn’t want to do a gig about mental health without addressing what I think in our industry is the maddest thing to happen in a f****** long time, it’s so sad.”

Flack was arrested and charged with assault by beating after police were called to her flat in Islington on December 12.

Highbury Corner Magistrates’ Court heard that, in the aftermath of the alleged incident, Flack told police “I did it” and then warned she would kill herself.

Dommett said: “Like a lot of people, in December I sent her a message to see if she was OK and she replied and we talked back and forth for a bit.

“I hadn’t heard back from her since maybe the end of January and I messaged her on Thursday asking if she was OK and I didn’t think of looking to see if she had replied or not.

“She didn’t reply so I didn’t see it come up on my phone and it wasn’t until yesterday when I heard the news that I looked at my phone and I realised that she hadn’t replied but this is what f****** kills me, there was a little bit underneath it that says ‘seen’.

“I said, ‘Hope you’re OK, hope you’re doing alright’ and she saw it. We all feel like maybe we should have done more, but she had people around her and I think that’s really great, and I’m just really sad.

“But it’s not about me and that’s the point, I don’t want to make it about me, saying ‘I messaged her on Thursday’, I just feel like we should all be nicer to each other, we are all accountable and I think that is the problem.”

Before reading out a sample of abusive tweets he had received in the past week, he added: “We all need to take a f****** look at ourselves and be better people and just be better and just be nicer to everyone and just try.”

Flack stepped down from presenting the current winter series of Love Island after the alleged assault.

The ITV programme did not air on Sunday night, but will be back on Monday with a tribute to Flack.

Ambulance crews were called on Friday night to a property in Clapton, north-east London, where Flack was thought to have recently moved.

The shock news prompted a flood of tributes from celebrities. But it also brought questions about the decision to persist with prosecuting Flack for the alleged assault on her boyfriend, and about the pressures faced by TV celebrities from the press and social media.

Her management company criticised the Crown Prosecution Service (CPS) for pressing ahead with what it called her “show trial” even after her boyfriend said he did not support it.

Lawyers have said prosecutors may have pressed ahead with assault charges against Flack due to high public concern around domestic violence.

Former director of public prosecutions Lord Ken Macdonald told the PA news agency there would generally be “a strong presumption” that bringing charges in any domestic violence case would be in the public interest.

“We have about 170 or 180 people every year, mainly women, who are killed during domestic violence incidents. There is a huge amount of public concern about these offences.

“Generally, there would be a strong public interest presumption in favour of prosecuting a domestic violence case where there is enough evidence to do so.”

The tragedy has put the spotlight back on the pressures which come with TV celebrity.

Flack is the fourth person linked to the ITV2 dating programme to have killed themselves.

Her boyfriend Aaron Armstrong, who had found her body, killed himself three weeks later. He was 25.

Mike Thalassitis, who appeared in the 2017 series, was 26 when he was found dead in a park in March last year.

A Number 10 spokesman said: “Caroline’s death was a tragedy and our thoughts are with her family and friends at this very difficult time.”

Comedy Against Living Miserably will air on Dave in the spring.

People can donate to Calm at https://www.thecalmzone.net/donate.