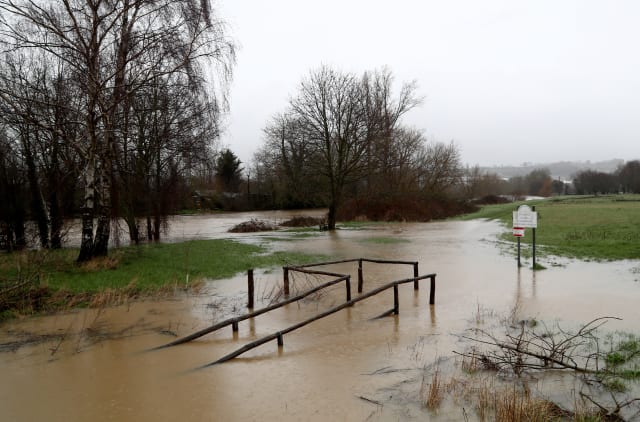 Hundreds of flood alerts remain in place across Britain after Storm Dennis battered the country, with one woman feared missing after being swept away by floodwater.

Severe weather conditions over the weekend saw winds of more than 90mph lash parts of the UK, while more than a month’s worth of rain fell in 48 hours in places.

Major incidents were declared due to flooding in South Wales as well as in Worcestershire and Herefordshire, while a record number of flood warnings and alerts were issued by the Environment Agency (EA).

Hereford and Worcester Fire and Rescue Service said it had pulled one man from the River Teme at Eastham Bridge on Sunday morning, with a female casualty still unaccounted for as of about 4pm.

A man in his 60s died on Sunday after being pulled from the River Tawe near Trebanos Rugby Club in Wales, but Dyfed-Powys Police said his death was not being linked to the bad weather.

The bodies of two men were pulled from rough seas off Kent on Saturday as the UK was struck by a storm for the second weekend in a row.

Army personnel were deployed over the weekend to assist people in parts of West Yorkshire which had already been badly hit by flooding during Storm Ciara.

Roads and railways were flooded on Sunday after the torrential downpours and high winds.

On Monday, the Government said it had activated the Bellwin scheme to provide financial assistance to storm-hit areas.

Under the scheme, local authorities dealing with the storm’s impact can apply to have 100% of eligible costs above a threshold reimbursed by the Government.

As of 8am, the EA had five severe flood warnings in place for England, meaning there is a “danger to life”.

These cover parts of the River Teme in Worcestershire, Herefordshire and Shropshire, and the River Wye at Blackmarstone, Hereford.

Pictures posted online showed pictures of flooded streets in Tenbury Wells in Worcestershire, with one woman whose family had sent her pictures from the area describing it as “scary” .

An emergency relief centre has been opened in Tenbury High Ormiston Academy for people affected by flooding.

The EA said river levels at Tenbury peaked at nearly 20ft (6m) on Sunday evening and warned that more rain is expected throughout Monday.

Meanwhile, the EA said water levels on the River Ouse in York are set to peak on Tuesday afternoon but at levels below those seen during the widespread flooding in the city in 2015 and 2000.

Further north, The Scottish Borders Council said the village of Newcastleton had experienced the worst flooding in recent times.

The council said: “Three sections of rivers in the Borders reached the highest levels ever on Sepa’s (Scottish Environment Protection Agency) records – these were Hawick’s Slitrig Water, the Jed Water at Chesters, and the Liddel Water at Newcastleton.”

More than 600 flood warnings or alerts are also in place across England – covering an area from Scotland’s River Tweed to the rivers of west Cornwall.

The Met Office has issued a yellow warning for strong winds covering Scotland, Northern Ireland and much of the Welsh coast and south-west England until 11am on Monday.

Newly-appointed Environment Secretary George Eustice said the country had not been caught off guard by the floods caused by Storm Dennis.

He blamed the “nature of climate change” for the scale of the damage, and said: “There is always more that can be done.”

More than 900 EA staff are on active incident duty and teams have put up more than two miles (3.5km) of temporary flood barriers across the country.