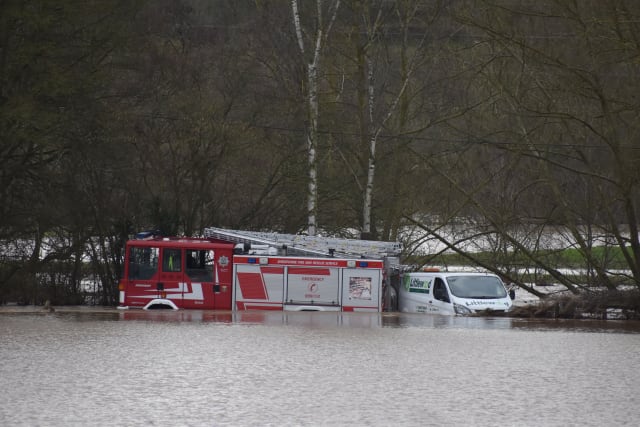 Residents living near Eastham Bridge in Worcestershire described 48 hours of chaos as they lost count of the number of vehicles – including a fire engine and a petrol tanker – caught in floodwaters.

At least seven vehicles were still stranded near the bridge on Monday – with residents relating how a helicopter equipped with a searchlight was used to rescue the driver of a 4×4.

One local woman aged in her mid-70s said she had never seen flooding so severe at Eastham Bridge, near Tenbury Wells, where a fire crew was trapped while attending a risk-to-life call.

Another resident, whose home overlooks the river, said: “All the emergency services have been there and a Morrisons tanker has been stuck for a couple of days.

“A man in a Range Rover was in the floodwater and he got out and was swept away, but they did find him down the river towards Eardiston.

“We have had the (police) helicopter for two days, all the services have been down here, including a rescue boat, because people have still decided that they would prefer to try to and drive through four feet of water.”

A man who was nearby during the early hours of Monday said a van driver was also rescued after his vehicle became stuck next to the fire engine.

The witness, who asked not to be named, said: “Apparently the van was lifted up by the water on the road alongside the river and just floated down towards the fire engine.”

Eye-witnesses said the fire engine’s sirens were left on after it became stranded – with one firefighter seen standing on its roof before the vehicle was abandoned.

Shropshire Fire and Rescue Service said the engine was dispatched at the weekend to reports of two people being swept away in the River Teme, in the neighbouring Hereford and Worcester Fire and Rescue area.

A brigade spokesman said: “The crew are safe and well, they all were pulled to safety from the vehicle. It was the extreme flooding conditions that overwhelmed the appliance.”