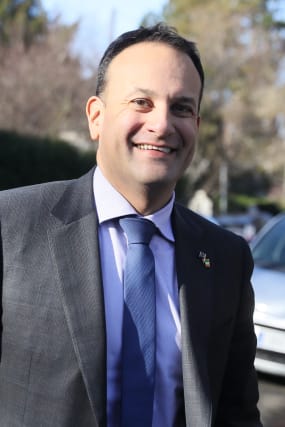 Leo Varadkar has said his party is preparing to go into opposition in the new Dail.

After a six-hour parliamentary party meeting on Monday, the Fine Gael leader said he “relishes the challenge” to lead in opposition.

It was the first time the parliamentary party had met since Fine Gael lost 12 TDs in the general election.

Mr Varadkar said the onus is now on Sinn Fein to form a government.

He told the media: “I relish the challenge of leading the opposition, providing good, robust and detailed and forensic opposition to the next government.

“It’s very much our view that Sinn Fein has the largest party, the onus is on them to form a government with parties of the left and Independents.

“The onus is on them to deliver on the extraordinary promises that they made to people during the course of the election campaign.

“If they’re unsuccessful the onus then falls to Fianna Fail to form a government with Sinn Fein or other parties and Independents, and they should be given the opportunity to do that.”

Asked if he would go into coalition if Sinn Fein and Fianna Fail cannot get the numbers to form a government, Mr Varadkar said: “I think that’s just far too many hypotheticals. But certainly we’re not going to be rushed into anything.

“This time in 2016 we were the largest party, we spent 76 days trying to put together a government involving smaller parties and Independents and we did that, and now the onus falls on Sinn Fein as the largest party in the Dail to do that.”

He added: “I really want to do what I didn’t have a chance to do as Taoiseach, which is to be party leader, to be present in Fine Gael, to rebuild our party and to emphasise our identity again.

“It shouldn’t come to the fact that Fine Gael may be needed. Other parties sought a mandate – they made a lot of extraordinary, impossible promises to the Irish people – and they have a duty now to fulfil those promises or come out here and say that they failed.”

His comments come after Mary Lou McDonald said it is still possible to have a Sinn Fein-led government despite the numbers making it difficult.

The Sinn Fein leader said talks will intensify with smaller parties this week in a bid to form a left-leaning government.

She said: “There is undoubtedly a solid block of TDs for change for a new government. I remain very determined that we deliver that government.

“And I think that we need to knuckle down on the policy issues on housing, on the need to cut rents and freeze them, on the need to deliver a huge public housing programme, and on the need to resolve the issue around pensions and get it back to the age of 65.

“We are still very determined that an alternative and a new government of change can be created. And we will intensify our efforts this week when we have conversations with other parties.

“I am very clear that we have been elected in very large numbers to be in government, even to lead the next government. I’ve also said that the idea of seeing Fine Gael or Fianna Fail returned again for five years is unthinkable.

“We can speculate on many, many things but I think we can be clear that the outgoing government was deeply unpopular and failed people in many and profound ways, and that people voted for change.”

Ms McDonald said there is little public appetite for another election but Sinn Fein will fight one if required.

“I want to see a good, stable, strong government that can deliver on housing, on health, can deliver on the issues that matter to people. But if there is an election, I mean we’ll go and we’ll fight the election,” she said.

Solidarity-People Before Profit has urged the Green Party not to prop up a Fianna Fail and Fine Gael government.

In a meeting on Monday, Solidarity-People Before Profit TD Richard Boyd Barrett said the two main parties will not implement changes demanded by the public.

“The main message we will be trying to put across is urging the Green Party not to prop up a government of Fianna Fail and Fine Gael,” Mr Boyd Barrett said.

“We think there is an overwhelming mandate for change and we want to see that movement for change not sabotaged by seeing a return to power of Fianna Fail and Fine Gael… because of the sort of change people are asking for on the housing crisis and health crisis, the cost of living for working people, climate change.

“Action is required and that is not compatible with the continuation of Fianna Fail and Fine Gael in government.

“We will be urging Eamon Ryan to work with the left with a view to delivering on the mandate and demand for change and to try and press forward with the possibility of a left government to deliver that change.”

Solidarity’s Mick Barry said the party will urge the Greens to “close the door” on any deal with Fianna Fail and Fine Gael.

Colleague Paul Murphy said: “Even for the Greens’ own policies to be implemented – for example, they call for a 7.67% annual reduction in carbon emissions – that will not be delivered in a government with Fianna Fail and Fine Gael.

“Even their limited demand – which is inadequate – for doubling investment in public transport will not be delivered in government with Fianna Fail or Fine Gael.

“There is a majority in society for a whole series of left-wing policies.”