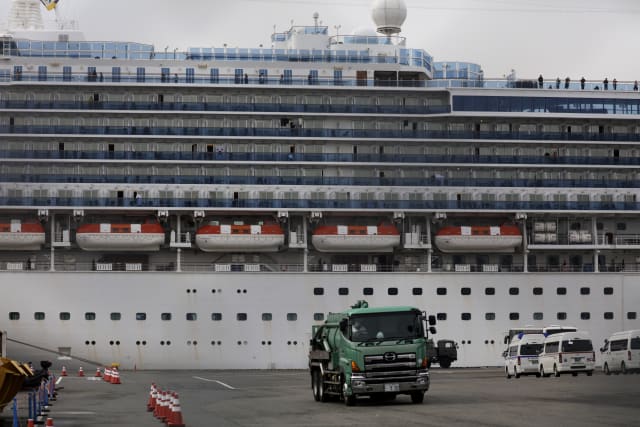 The Foreign and Commonwealth Office (FCO) is “working to organise” a flight back to the UK for British nationals on board a cruise ship quarantined off the coast of Japan due to coronavirus fears.

The department has faced pressure to fly home the 74 Britons on the Diamond Princess after the US chartered two planes and repatriated 340 of its citizens.

“Given the conditions on board, we are working to organise a flight back to the UK for British nationals on the Diamond Princess as soon as possible,” a statement from the department said.

“Our staff are contacting British nationals on board to make the necessary arrangements. We urge all those who have not yet responded to get in touch immediately.”

Earlier, a Number 10 spokesman said those on board the ship docked near Yokohama, Japan, were being contacted about the possibility of a repatriation flight.

On Monday, the Japanese Health Ministry confirmed 99 more people on board have been diagnosed with the illness, bringing the total to 454.

Four Britons with confirmed coronavirus are currently in hospital in Japan, according to the latest official figures.

The data comes after Sir Richard Branson said Virgin Atlantic was “in discussions” with the Government over whether he could help those stranded.

He responded via Twitter to an appeal from David and Sally Abel, who are among those who have been trapped in their cabins for days, who asked the British businessman and philanthropist to charter a special plane.

The couple’s son Steve Abel renewed appeals for the Government to help his parents, who he fears may become separated in Japan.

Both are still awaiting the results of their own tests for Covid-19.

Princess Cruises president Jan Swartz said the firm has worked with authorities to send more doctors and nurses on board the ship and has helped fulfil 2,000 prescription requests.

However, there is still uncertainty over whether passengers will be able to leave the ship at the end of the 14-day quarantine period on Wednesday.

'We're not done yet': Coronavirus lockdown must be extended, government confirms