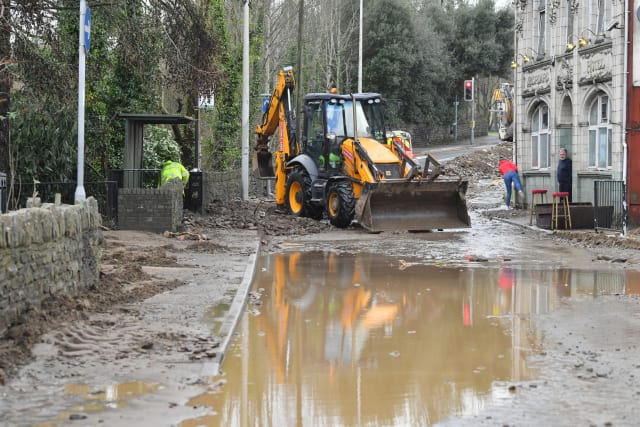 It will cost millions of pounds to repair the damage caused to the Welsh Valleys by Storm Dennis, according to a council leader.

Andrew Morgan, leader of Rhondda Cynon Taf Council, said the local authority had immediately released £1 million from its reserves to deal with the aftermath of the flooding and landslides which have hit the towns and villages of the borough.

The flooding caused by Storm Dennis has been described as the worst to affect the area for over 40 years.

He has also established a multi-agency recovery board to co-ordinate the council’s response to the disaster, which will meet for the first time on Tuesday.

“The first responsibility for this board will be to consider the community impact and subsequently what resources are necessary to support our communities and to repair the significant damage caused across the county, including to our town centres, bridges and infrastructure, public buildings and our flood defences,” Councillor Morgan said.

“The recovery from this unprecedented flooding event will take some time and initially we will need to prioritise key infrastructure and buildings.

“Many of the buildings which the council relies on to deliver key services have been severely affected.”

Councillor Morgan said he wanted to hear from local residents affected by flooding in order for the council to plan its support for communities in the coming weeks.

“Following discussions with the First Minister, I have explained that from the early analysis we have carried out so far that there will be a multi-million pound repair and recovery cost associated with this flood event, which appears to be the worst in over 40 years with some river gauges breaking their highest level records from over 40 years ago,” he said.

“Clearly with the significant cost brought about by the flooding, I would expect the Welsh Government to provide funding support to assist our recovery plans as they did in 2018 for Storm Callum.

“The severity of the impact on our communities means that identifying funding to repair the damage to roads, parks, bridges, flood defences and community buildings will need to be a key financial priority for the foreseeable future.”