Coronavirus: Stranded Britons on cruise ship could be flown home 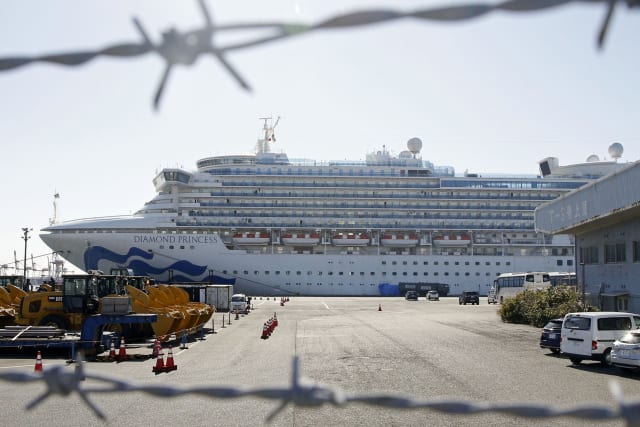 More than 70 Britons stranded on a coronavirus-hit cruise ship could be flown home, Downing Street has confirmed.

A Number 10 spokesman said those on board the Diamond Princess, which is docked in Yokohama, off the coast of Japan, were being contacted about the possibility of a repatriation flight.

It comes after pressure mounted on the Foreign Office to evacuate British nationals from the ship.

On Sunday, the US charted two planes and flew home 340 of its citizens while other countries, including Canada, Hong Kong and Australia, have said they are organising flights to remove people from the ship.

On Monday, the Japanese Health Ministry confirmed 99 more people on board have been diagnosed with coronavirus illness, also known as Covid-19, bringing the total to 454.

The Number 10 spokesman said: “We sympathise with all those caught up in this extremely difficult situation.

“The Foreign Office is in contact with all British people on the Diamond Princess, including to establish interest in a possible repatriation flight.

“We are urgently considering all options to guarantee the health and safety of those on board.”

It comes after Sir Richard Branson said Virgin Atlantic was “in discussions” with the Government over whether he could help those stranded.

Sir Richard took to Twitter in response to an appeal from David and Sally Abel, who are among those who have been trapped in their cabins for days.

Sir Richard tweeted: “@VirginAtlantic does not fly to Japan, but we are in discussions with the UK government and seeing if there is anything we can do to help.”

Last week, Mr Abel appealed to Mr Branson to charter a special plane to rescue British nationals from the ship.

In a new video post on Monday, Mrs Abel admitted that seeing American passengers being allowed to exit the ship had “got to her”.

She said: “I have to say, I realise why, but they put up a YouTube film of them going down the stairs, walking outside, being greeted by the American people outside there,” she said.

Mr and Mrs Abel are still awaiting the results of their own tests for Covid-19 and said the constant announcements on board the ship are making them sleep-deprived.

Mrs Abel said: “Before anybody says I look tired – I am tired, and the reason being because the Americans didn’t leave here until the early hours of the morning and we’d been in bed several hours.

“Every half an hour we would be woken with an announcement for the next lot to go down to the coaches. So that’s why we look tired – after this recording we will have a nap.”

The couple said the last announcements were at 1am and that breakfast had been served to them at 6am.

“We haven’t had very much sleep at all,” said Mrs Abel.

Two other Britons, Alan Steele, who tested positive for the virus earlier this month, and his wife, Wendy, who tested negative, have also criticised Japan’s handling of the outbreak and the British government’s lack of action.

Mr Steele, who said he has now been given the all-clear, said on Facebook on Sunday: “Getting the impression Japan have screwed up this quarentine [sic] and want to reset the clock. just remember we are ppl not objects and we have rights.”

He said confining people to their cabins was starting to take a toll on passengers’ mental health and it was time for the UK Prime Minister to “get the Brits back”.

Meanwhile, health officials are due to tell schools on Monday they do not need to close or send staff and pupils home if there is a suspected case of coronavirus.

Public Health England (PHE) will publish guidance saying that no restrictions or special control measures are needed while tests for Covid-19 are carried out on a suspected case.

If a case of the virus is confirmed, then health protection teams would trace those at risk.

The new guidance comes the week after at least seven schools in Brighton, Hove and Eastbourne messaged parents saying that they would authorise absences for families wishing to self-isolate.

Nine people in the UK have tested positive for Covid-19, with eight of those patients now discharged from hospital.