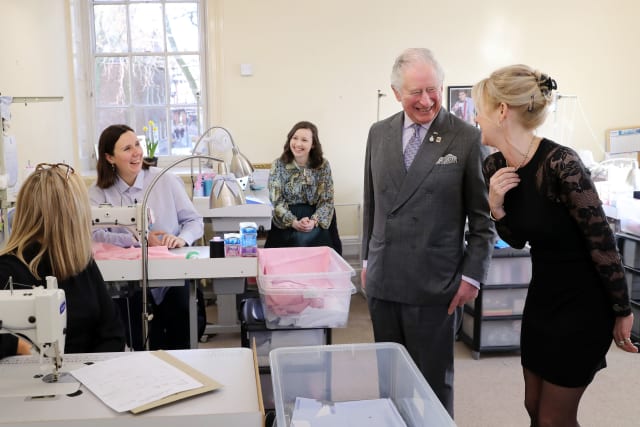 The Prince of Wales joked about his efforts to stay in shape when he visited his shirt maker – saying "it's a never-ending battle".

Charles' quip came as he toured the Gloucester workshop of Emma Willis, who has been producing handmade shirts for 30 years and, through her charity Style for Soldiers, supporting wounded servicemen for more than a decade.

Ms Willis' 30-strong team of cutters and seamstresses produce ready-to-wear shirts costing from £200 and bespoke shirts from £310, and have been creating items for Charles for the past five years.

When the heir to the throne was presented with a shirt as his visit to the factory, based in an 18th-century property in the city, came to an end, he said: "Very kind of you – you've got my measurements.

"I struggle to keep them the same, a never-ending battle."

Ms Willis, who has a shop in Jermyn Street, a central London area famed for its high-end men's clothing and accessories, described producing items for the prince as an honour.

She said: "I was approached by one of his dressers about six years ago, and the dresser said His Royal Highness would like to try my shirts.

"So I went to Clarence House and measured His Royal Highness for the first time and we've been making his shirts ever since.

"And one of the things we specialise in is very fine Swiss cottons and he loves lovely soft fabrics."