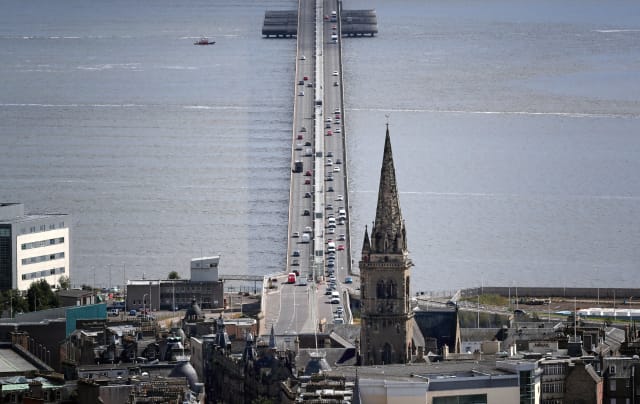 The Tay Road Bridge was closed to all traffic with weather warnings still in place amid the aftermath of Storm Dennis.

Winds battered most of Scotland on Sunday with a Met Office warning in place until 11am on Monday.

At around 9pm, the bridge connecting Fife and Dundee was open only to cars and single-decker buses.

However, this was revised less than an hour later because of the high winds.

At the other end of the country, emergency service crews rescued two people “just in the nick of time” after their car was swept from the road and pinned to a metal gate by a torrent of floodwater.

Specialist fire crews waded into the fast-flowing water in the Scottish Borders as Storm Dennis lashed down to save the pair from the “extremely dangerous situation” after a river had burst its banks.

Photos of the rescue and its aftermath show the Volkswagen Golf in a field, perpendicular to the Newcastleton road.

The pair were taken to hospital by paramedics after being rescued from the “perilous” scenario, but were later discharged and able to return home.

Newcastleton, where the rescue took place, and Hawick in the Scottish Borders were the last remaining parts of Scotland to have severe flood warnings.

The warnings issued by the Scottish Environment Protection Agency expired on Sunday afternoon.

Ferry firm CalMac had also cancelled many planned Sunday sailings with some services on Monday due to be affected by the conditions.