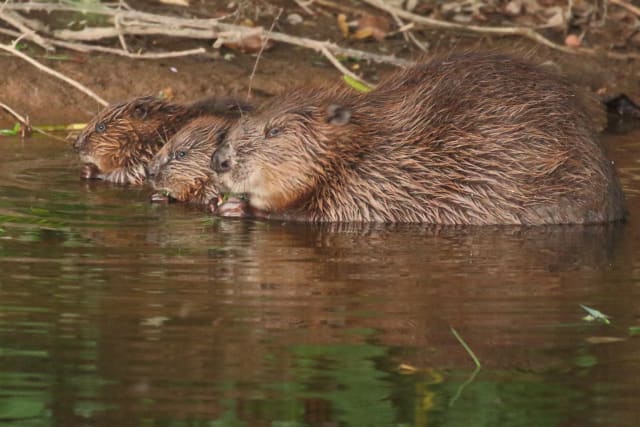 Beavers living wild on an English river have reduced the risk of flooding for local people and boosted wildlife, a five-year trial has found.

The aquatic mammals living on the River Otter in Devon have caused some localised problems for several landowners, but these could be addressed successfully with “active management”, the study said.

Other wildlife, including fish, water voles, amphibians and birds, have benefited from the presence of the beavers living on the river and creating new habitat.

The findings are the culmination of a five-year study of the first licensed release of beavers into the wild in England since they were hunted to extinction more than 400 years ago.

It found the wild beavers on the south Devon river provided more benefits to people and the landscape than the costs they caused.

As the report was published, the Government said the trial has been extended until the end of August to assess the findings, which will help inform decisions on the future of the Devon beavers and their wider status in England.

The species has been given protected status in Scotland, where it returned through an official trial and illegal releases or escapes, while England also has a number of fenced enclosures with beavers in to manage the landscape.

National polling as part of the study showed 86% of people support reintroductions and three quarters think beavers should be protected.

Beavers had been living wild on the Devon river for up to a decade when
the trial began in 2015, but faced being re-homed in captivity after evidence
emerged that they were successfully breeding.

Plans for a monitoring trial were put forward by Devon Wildlife Trust and were given the green light by Government agency Natural England, with the two family groups allowed to remain on the water.

There are now at least eight pairs of beavers, occupying the main River Otter and the connected Tale, as well as some smaller tributaries.

Research by the team of scientists, overseen by Professor Richard Brazier from the University of Exeter, found they are providing benefits to people, including in the flood-prone community of East Budleigh.

Beavers have constructed six dams upstream of the village, which have measurably and significantly reduced peak flood flows through the community, the report said.

Evidence from another trial in north Devon, where beavers in an enclosure have built 13 dams and ponds, shows they also play a role in filtering soil, manure, slurry and fertilisers from farmland.

The way the beavers “engineer” the landscape creates wetland, water channels and marshy grassland, which provide homes for a wide range of wildlife including threatened water voles and wading birds.

Despite concerns that beaver dams might affect fish populations, the research found that in the pools created by damming the streams there were 37% more fish than in comparable stretches of the river with no dams.

Researchers also recorded trout leaping up and passing over beaver dams when river levels were high.

Beavers flooded land at five sites, including a field with an organic potato crop, while there were also incidents of the animals eating maize and windfall apples and trees in riverside orchards.

The researchers said the majority of issues can be addressed by moves such as installing the beaver deceivers,  which allow water to flow through a dam without the animals detecting and plugging the leak, or removing dams.

Devon Wildlife Trust’s Mark Elliott, who leads the River Otter Beaver Trial, said “I think we’ve all been surprised by these amazing animals’ ability to thrive, once again, in our wetland ecosystems.

“It also shows their unrivalled capacity to breathe new life into our rivers and wetlands, very few of which are in good health.”

He said beavers played a crucial role in the benefits society could get from healthy, naturally-functioning rivers and streams.

And he said:  “The key to success will be to provide support for all landowners to make space for wetlands on their land – ensuring those who enable these far-reaching benefits to be provided are also able to manage their thriving rural businesses.”