Storm Dennis: ScotRail advises people in west of Scotland not to travel 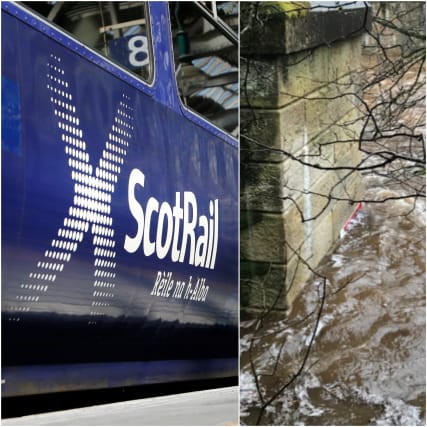 People in the west of Scotland have been advised against travelling by train as Storm Dennis continued to cause disruption across the country.

Ferry services and football games were also cancelled on Saturday with harsh rain, heavy flooding and high winds sweeping across the country on Saturday night.

Southern parts of Scotland were under an amber warning for rain from midday to 8pm on Saturday, with a yellow wind and rain warning also in place to 9pm.

On Saturday evening, ScotRail posted a statement on Twitter advising against travelling in parts of the country because of disruption on a number of lines.

It said: “#StormDennis We’re advising customers in the West of Scotland NOT TO TRAVEL due to the severe disruption.

“Unused tickets will be refunded in full at the point of purchase.”

Rail tickets were also being accepted by First Bus in some areas as an alternative means of travel.

The weather lead to replacement buses in areas including between Perth and Inverness, Dumbarton and Helensburgh, and Kilwinning and Largs/Ardrossan Harbour.

However, services on the Shotts and Craigendoran lines were running again with conditions easing up, ScotRail also said.

Earlier in the day, Network Rail tweeted that water levels had breached the safety limit at Inver on the Highland Mainline with “no option but to close the line for safety reasons until it recedes and safety checks are carried out”.

Another post added: “Our engineer has advised that the line can’t reopen until a full inspection has been carried out.

“This is unlikely to take place until tomorrow morning.”

The A9 was also affected by the conditions with pictures and videos appearing on social media showing flooding from nearby fields.

Police Scotland tweeted: “We’re aware of significant flooding on the A9 between Auchterarder and Greenloaning.

“We are currently assessing the situation with partners and motorists are urged to avoid the area.”

Another video taken – by Michael Cranston, a flood forecasting scientist – showed a “road transformed into a burn” near Tullibardine at Auchterarder, Perth and Kinross earlier on Saturday.

Some residents in Abington, South Lanarkshire, had used sandbags to stop the heavy rain and flooding seeping over from the road onto the pavements.

Meanwhile ferry firm CalMac had to cancel all planned Sunday sailings between Fionnphort and Iona due to the warnings.

Other Sunday services between Ullapool and Stornoway, Oban and Castlebay, Mallaig to Lochboisdale and Oban to Lochboisdale were also called off in advance with more cancellations set for Monday.

Two Scottish Premiership matches were called off, with Rangers v Livingston and Motherwell v St Mirren falling foul of the conditions along with Ayr United v Greenock Morton in the Championship.

However, the game in Glasgow has been rescheduled for Sunday despite warnings remaining in place – and
Livingston bosses calling for the game to be played on Monday night in a move rejected by the SPFL.

A multi-agency response team has been operating at the Traffic Scotland National Control Centre in South Queensferry to monitor conditions.

Transport Secretary Michael Matheson previously said: “The Met Office is expecting Storm Dennis to bring another period of adverse weather this weekend, with heavy rain and strong winds forecast for much of Saturday and Sunday, and into Monday morning.

“The conditions will bring potential for disruption on the trunk road network, as well as other modes of transport, so it’s important people plan their journeys before they set off.

“Motorists should make sure their routes are available, follow the travel advice from Police Scotland and drive to the conditions.”

Elsewhere, a deployment of 75 soldiers from the 4th Battalion, Royal Regiment of Scotland, was supporting the Environment Agency’s efforts in Calderdale, West Yorkshire.

For a second weekend in a row, the area was expecting floods with the soldiers helping to prepare defences and assist with warning residents or potential rescues if necessary.