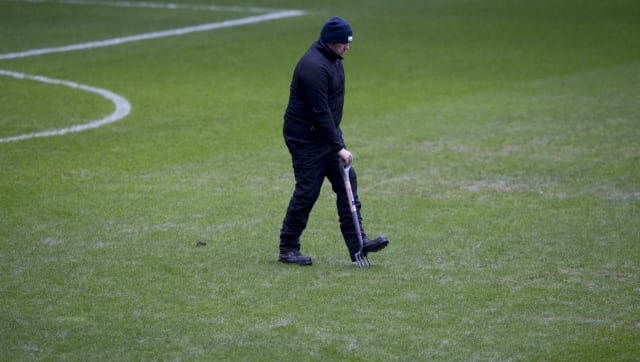 Storm Dennis has descended on Scotland, with many parts of the country suffering disruption for the second time in less than a week.

Ferry services and football games were cancelled on Saturday with harsh rain, heavy flooding and high winds across the country.

One video taken by Michael Cranston, a flood forecasting scientist, showed a “road transformed into a burn” near Tullibardine at Auchterarder, Perth and Kinross.

Another user on Twitter, @whokens, showed further flooding “on the road from the fields” in the Blackford area near the A9.

Southern parts of Scotland were under an amber warning for rain from midday to 8pm on Saturday, with a yellow wind and rain warning also in place to 9pm.

Some residents in Abington, South Lanarkshire, had used sandbags to stop the heavy rain and flooding seeping over from the road onto the pavements.

The weather also affected ScotRail services with replacement buses in place between Perth and Inverness, Dumbarton and Helensburgh, and Kilwinning and Largs/Ardrossan Harbour.

Meanwhile ferry firm CalMac had to cancel all planned Sunday sailings between Fionnphort and Iona due to the warnings.

Other Sunday services between Ullapool and Stornoway, Oban and Castlebay, Mallaig to Lochboisdale and Oban to Lochboisdale were also called off in advance with more cancellations set for Monday.

Two Scottish Premiership matches were called off, with Rangers v Livingston and Motherwell v St Mirren falling foul of the conditions along with Ayr United v Greenock Morton in the Championship.

However, the game in Glasgow has been rescheduled for Sunday despite warnings remaining in place.

Livingston bosses have already expressed doubts the game will beat the weather after revealing they had a call for the game to be played on Monday night rejected by the SPFL.

A multi-agency response team has been operating at the Traffic Scotland National Control Centre in South Queensferry to monitor conditions.

Transport Secretary Michael Matheson previously said: “The Met Office is expecting Storm Dennis to bring another period of adverse weather this weekend, with heavy rain and strong winds forecast for much of Saturday and Sunday, and into Monday morning.

“The conditions will bring potential for disruption on the trunk road network, as well as other modes of transport, so it’s important people plan their journeys before they set off.

“Motorists should make sure their routes are available, follow the travel advice from Police Scotland and drive to the conditions.”

Elsewhere, a deployment of 75 soldiers from the 4th Battalion, Royal Regiment of Scotland, was supporting the Environment Agency’s efforts in Calderdale, West Yorkshire.

For a second weekend in a row, the area was expecting floods with the soldiers helping to prepare defences and assist with warning residents or potential rescues if necessary.