Caroline Flack dead at 40 after taking her own life 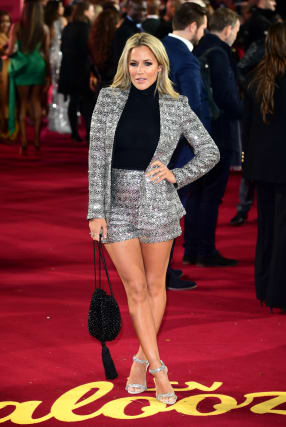 Caroline Flack has died at the age of 40 after taking her own life.

The Love Island star was found dead at her new flat in east London on Saturday.

Her family said in a statement: “We can confirm that our Caroline passed away today, the 15th of February.

“We would ask that the press respect the privacy of the family at this difficult time and we would ask they make no attempt to contact us and/or photograph us.”

Flack is the fourth person linked to the ITV2 dating programme to have died.

Her boyfriend Aaron Armstrong, who had found her body, went on to hang himself three weeks later. He was 25.

Mike Thalassitis, who appeared in the 2017 series, was 26 when he was found hanged in a park in March last year.

Following the news of Flack’s death, an ITV spokeswoman said: “Everybody at Love Island and ITV is shocked and saddened by this desperately sad news.

“Caroline was a much loved member of the Love Island team and our sincere thoughts and condolences are with her family and friends.”

The troubled Love Island star stepped down from presenting the current winter series of the show after she was alleged to have assaulted her boyfriend Lewis Burton 27, at her then flat in Islington, north London, in December.

She entered a not guilty plea to the assault charge at Highbury Corner Magistrates’ Court and she was released on bail, with conditions that stopped her having any contact with Burton ahead of a trial in March.

Burton, a former professional tennis player, had shared a post declaring his love for Flack on his Instagram Stories on Valentine’s Day.

Along with a picture of the two of them together, he wrote: “Happy valentines, love you.”

Flack had also taken to social media shortly before her death, sharing a collage of pictures of herself with her pet dog on Instagram on Thursday.

Laura Whitmore, who replaced Flack on Love Island for the latest series, tweeted “I’m trying to find the words but I can’t”, followed by a broken heart emoji.

Dermot O’Leary who previously worked alongside Flack on The X Factor, posted a picture of the pair of them together on Instagram.

He said: “Just the worst news. Poor soul. Sending love to hers, and yours. Hold them tight tonight people. X Candles lit.”

The Masked Singer star tweeted: “I’m so so sad to hear about @carolineflack1.

“I don’t even know what to say. But my heart goes out to her friends and family x I might be a bit quiet tonight on social media .. just doesn’t seem right.”

Flack’s TV presenting roles have included Gladiators, I’m A Celebrity… Get Me Out Of Here! NOW!, The X Factor and The Xtra Factor.

She won Strictly Come Dancing in 2014 while paired with professional dancer Pasha Kovalev.

The following year she joined the revival of dating reality show Love Island on ITV2.

She hosted the first five series of the popular programme – one of the most-watched reality shows in the UK in recent years and won a TV Bafta in 2018 – as well as its spin-off programme Aftersun.