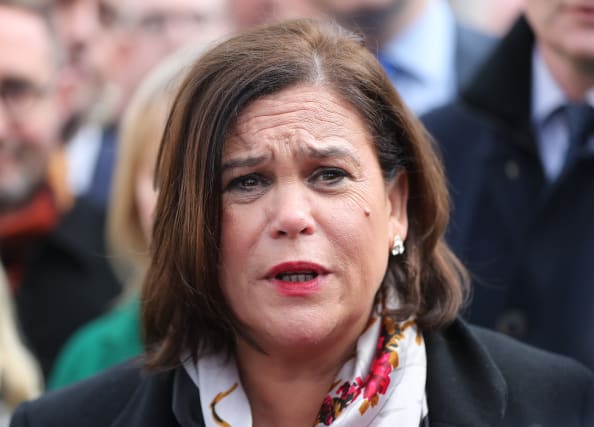 Sinn Fein leader Mary Lou McDonald has blasted “arrogant” political rivals for denying her party a place in the next Irish Government.

Fianna Fail has ruled out entering a coalition with the left-leaning group because of historic links to the IRA and wide policy differences over issues like how to run the economy.

Sinn Fein emerged as the party with the largest first preference vote. It did not field enough candidates to fully capitalise on a wave of support inspired by discontent over problems in the health service and access to housing.

Ms McDonald said: “The political establishment of Fianna Fail and Fine Gael are circling the wagons in defence of a status quo that will not deliver the change citizens voted for last weekend.”

She addressed a party meeting in Belfast on Saturday.

Its total of 37 seats is one fewer than that of Fianna Fail.

No single party has enough seats to govern and Sinn Fein appears to have failed to muster enough support from a coalition of small left-leaning parties and independent members of the new Irish Parliament, the Dail.

Ms McDonald said the public had given her party a chance to show it can improve their lives.

“A chance to show that will we honour our commitments.

“A chance to shape a government that will finally do right by ordinary people.

“They want a government for change.”

She said that was why Fianna Fail and Fine Gael were – and are – so determined to keep Sinn Fein out of government.

“Because they don’t want change.

“That is why they said they wouldn’t talk to us.

“And it now seems that Micheal Martin’s plan is to deny the people what they voted for.

“That is an arrogant and untenable position, given the strength of Sinn Fein’s mandate.”