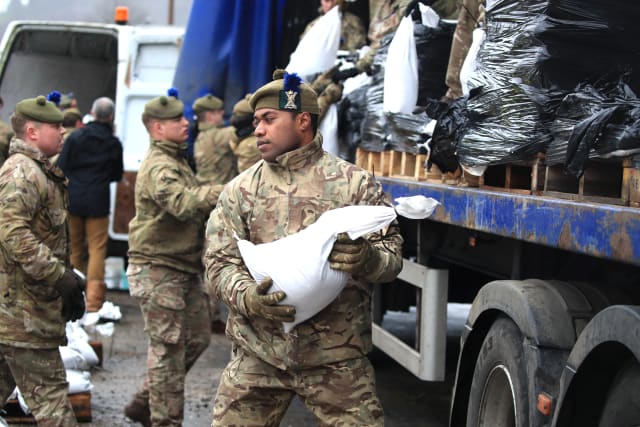 The Government will use “all means” available to help flood-hit communities, the Defence Secretary said, after the Army was sent in to help locals prepare for Storm Dennis.

A deployment of 75 soldiers from the 4th Battalion, Royal Regiment of Scotland, was supporting the Environment Agency’s efforts in Calderdale, West Yorkshire, which, for a second weekend in a row, was expecting floods.

A further 70 reservists from the 4th Battalion, The Yorkshire Regiment, were sent to help wherever required.

Defence Secretary Ben Wallace said: “Our armed forces are always ready to support local authorities and communities whenever they need it.

“The rapid response of the Army today will help with provision of flood relief to local communities in West Yorkshire.

“The Government won’t hesitate to use all means at its disposal to mitigate the effects of Storm Dennis.”

“Troops will remain on task as long as required,” he said.

“4th Infantry Brigade is based in Catterick and serves the communities of Yorkshire and the North East and are happy to be doing our bit and contributing to the swift response from the civil agencies.”

Calderdale Council said its teams were working hard ahead of Storm Dennis, but its resources had been stretched by the impact of Storm Ciara last week, and it welcomed the additional help from the Army.

Soldiers were helping to prepare defences and if necessary will assist with warning residents, and potential rescues.

Last weekend, a month’s rain in just 12 hours fell in the area surrounding the steep-sided valley where Mytholmroyd and Hebden Bridge are situated.

Since then, heavy plant has been brought in to lift huge bags of gravel on to the banks of the River Calder.

Of more than 400 properties flooded across Yorkshire last weekend, more than 200 were in Mytholmroyd – a village, like many in the area, still recovering from the devastating Boxing Day floods of 2015.

A £35 million flood defence scheme which was started in the wake of those 2015 floods was not due to be completed until the summer.