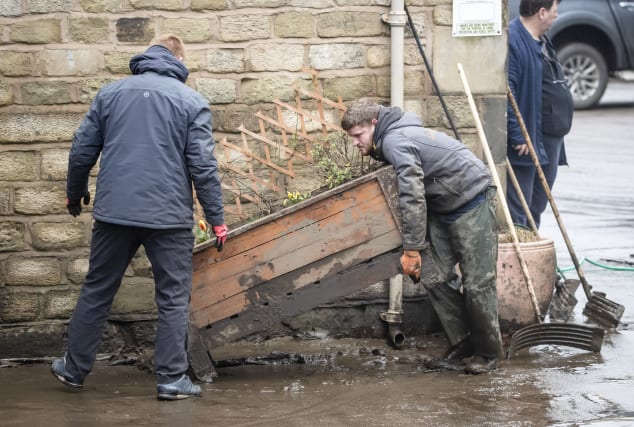 Efforts are continuing to shore up flood defences in towns and villages left devastated by flooding five days ago as Storm Dennis threatens a further deluge.

Communities along the river River Calder, in West Yorkshire, were inundated on Sunday as Storm Ciara brought a month’s rain in just 12 hours on surrounding fells.

On Friday, residents and businesses owners were “hunkering down” as they waited to see if the flood sirens sited in Todmorden, Hebden Bridge and Mytholmroyd sound again on Saturday as the Met Office warns of “very heavy rain, flooding and disruption” in the area.

Heavy plant machinery was being used to lift huge bags of gravel on to the river banks in the village of Mytholmroyd.

Of more than 400 properties flooded across Yorkshire last weekend, more than 200 were in Mytholmroyd – a village, like many in the area, still recovering from the devastating Boxing Day floods of 2015.

Scores of contractors were working at the site of £35 million flood defences which were begun in the wake of the 2015 deluge but not due to be finished until the summer.

In Hebden Bridge, two miles further upstream, Graham Mynott, the executive director of the Town Hall, said: “Everyone’s hunkering down and waiting to see what happens.

“There’s some fingers crossed out there.”

But he said the river was still at higher than normal levels and everyone was waiting to see where the eye of Dennis hits.

On Facebook, Mytholmroyd Flood Wardens said: “Everything we are hearing about this weekend is that it is going to be horrendous. Whilst we do not wish to scaremonger please have a plan. Again the advice will likely be not to travel unless totally necessary.”

Mr Mynott added: “There’s just a lot of uncertainty about what’s going to happen this weekend and when; what weather is going to come and when.”

He explained that even a five-mile difference in the location of any torrential downpours can have a huge effect on the levels of the Calder.

“We are expecting widespread totals of 30-50mm, with the possibility of localised totals of up to 80-100mm,” he said.

The spokesman said: “Following the flooding caused during Storm Ciara, we carried out repairs to the temporary flood defences in Mytholmroyd. Our contractors have completed the work and have improved their resilience in preparation for Storm Dennis.

“The Mytholmroyd flood defences are designed to provide much better protection for the local communities during small and medium-sized flood events. There is evidence that this is working as in areas such as Cragg Brook, the completed flood defences protected these properties.

“Our officers are continuing to work around the clock to help keep people safe and to manage the current flood risk.”

He also said the Foss Barrier has been operated in York to protect properties in the area.

The Environment Agency said that there is an ongoing £86 million programme of schemes throughout the Calder Valley – most significantly in Hebden Bridge, Mytholmroyd and Brighouse – aimed at protecting 600 properties.

According to the Environment Agency:

– 467 properties in Yorkshire were affected by Storm Ciara.

– It was the second-highest flood event recorded in the Calder valley, after the flooding of 2015. River levels at Gargrave and Dewsbury reached record heights.

– More than 100mm fell in the upper Calder catchment between 11pm Saturday February 8 and 11am Sunday February 9.