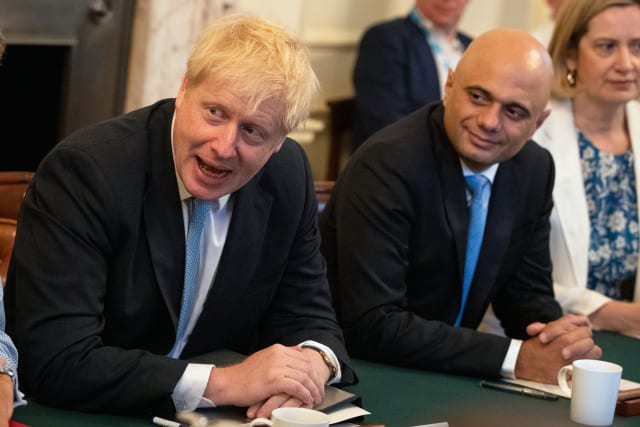 Boris Johnson’s decision to impose tight restrictions on his new Chancellor has been defended as his new-look Cabinet prepares to meet.

The Prime Minister’s reshuffle was dominated by Sajid Javid’s decision to quit Mr Johnson’s top team after he was ordered to fire his closest aides and replace them with advisers chosen by Number 10.

Mr Javid accused the PM of setting conditions “any self-respecting minister” would reject – seen as a thinly veiled swipe at his successor, Rishi Sunak.

But Communities Secretary Robert Jenrick said the Mr Johnson was the sole person in charge of shaping how his top tier of ministers functioned.

“The Prime Minister is very much in charge. He chooses the top team and how they are structured,” he told BBC Breakfast.

“We in Government are completely focused on getting things done, delivering on the priorities of the public – not on special advisers or how Government is run internally.”

He denied that Mr Sunak would be Mr Johnson’s “puppet” after acceding to his demand for more control, calling his colleague “one of the most talented people in politics today”.

Mr Javid had no words of animosity for the PM on Friday, as he faced up to being excluded from a Cabinet meeting for the first time in almost five years.

Asked by reporters as he left his south-west London home whether he had a message for Mr Johnson, the ex-business secretary answered: “Happy Valentine’s Day.”

His bombshell resignation – less than a month before the Budget – followed an escalation in tensions between the ex-chancellor and the Prime Minister’s chief adviser, Dominic Cummings.

In August, Mr Cummings fired Mr Javid’s aide, Sonia Khan, and it appeared Number 10 wanted to go further in keeping a close eye on him, a move that had been preceded by Treasury briefings to the press about his support for HS2 and talk of a mansion tax in the forthcoming Budget.

Salma Shah, a former aide to Mr Javid, told BBC Radio 4’s Today programme that not being able to choose his own political advisers would have been “incredibly detrimental to his decision-making power” in office.

And Mel Stride, chairman of the Commons Treasury Committee, said: “I think he, probably more by accident than design, was put into a position where it was extremely difficult for him to swallow that and move on.”

Downing Street has so far refused to guarantee that next month’s Budget will go ahead as scheduled, with a spokesman saying only that “extensive preparations have already been carried out for the Budget and they will continue at pace”.

Mr Johnson is due to meet his recast Cabinet in Downing Street at 10am.

A number of new and old faces will be present after the Conservative Party leader opted to shuffle the pack after delivering Brexit on January 31.

The number of women attending Cabinet fell as part of the changes, from eight to seven, while the total number of ministers attending shrank from 32 to 26.

Alok Sharma was promoted to Business Secretary and he will also be minister for the COP26 UN climate summit, which is due to take place in Glasgow in November.

Anne-Marie Trevelyan joined the Cabinet after picking up Mr Sharma’s previous role as International Development Secretary, having previously been a defence minister.

Oliver Dowden became a full Cabinet member as Culture Secretary, having previously attended the meetings as paymaster general, and George Eustice was promoted to Environment Secretary from his previous role in the same department.

Amanda Milling was made Conservative Party chairman – a role in which she will attend Cabinet as a minister without portfolio.