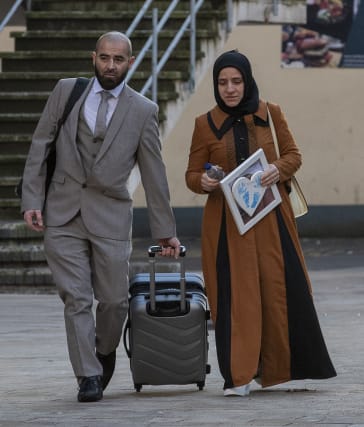 A father has spoken of his “torture” after judges ruled doctors can withdraw treatment from his brain-damaged son as he is now clinically dead.

Karwan Ali, 35, and his wife Shokhan Namiq, 28, who live in Manchester, had appealed after a High Court judge concluded four-month-old Midrar was brain stem dead and said doctors could lawfully stop treating him.

The parents wanted doctors to keep providing life-support treatment but three Court of Appeal judges on Friday dismissed their challenge and declared their son is dead.

Mr Ali disputed the medics’ findings and said his lawyers would be working on an appeal.

He said: “Can death simply be ruled by judges? It’s proscribed death, that is all I can say.

“My wife is feeling terrible, she can’t even eat now. It’s a very difficult situation for anyone to be in, they tell us the time and the minute.”

He added: “It’s like torture for me too now. I don’t know where this goes, the lawyers have to work on it. We will probably be appealing against it.

“I don’t know what the hospital will do without me agreeing to it. I don’t want to agree to my boy going blue on my hand.”

The three appeal judges at a Court of Appeal hearing concluded Midrar’s parents did not have an arguable case and declared he is dead.

Sir Andrew, president of the Family Division of the High Court and the most senior family court judge in England and Wales, said evidence showed “awfully” Midrar no longer has a “brain that is recognisable as such”.

He added: “There is no basis for contemplating that any further tests would result in a different outcome.

“No other conclusion was open to Mrs Justice Lieven.”

Solicitor David Foster, of law firm Barlow Robbins, representing Midrar’s parents, said an appeal was being considered by the couple.

Mr Foster said: “They believe the law in this area should be reviewed and do not consider Midrar’s condition is necessarily ‘irreversible’.

“They would like to have the court give weight to experts from outside the UK.”

Born on September 18, Midrar was starved of oxygen due to complications at birth and suffered brain damage, and been placed on a ventilator.

Appeal judges accepted evidence and declared Midrar had died at 8.01pm on October 1, when he was 14 days old.