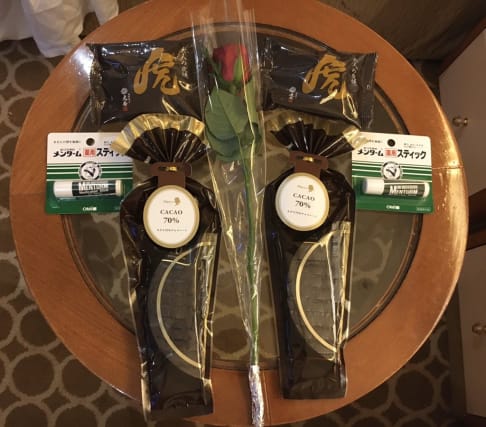 Holidaymakers confined to their cabins on a cruise ship quarantined off the coast of Japan have been treated to special Valentine’s Day meals, gifts and entertainment.

The Diamond Princess is moored at Yokohama Port and has 218 people infected with the recently named Covid-19, three of them British, out of 713 tested.

Of more than 3,500 people on board, 44 more tested positive on Thursday.

Strict hygiene regulations mean passengers are only allowed on deck for hour-long periods while wearing face masks, so staff have adapted the onboard entertainment and organised special gift packages for their guests.

In lieu of live performances or trivia games, the crew pre-recorded and uploaded Valentine’s-themed videos for the passengers’ cabin televisions.

Adult guests received presents including complimentary heart-shaped chocolates, roses, a collagen eye mask and hand cream, while children were given sweets and games.

Chocolates and earbuds for music were also gifted to crew members.

A special menu including dinner options such as “Cupid’s Avocado and Shrimp Salad” and a “Valentine’s Day Surprise Dessert of the Day” was also issued.

“Spending Valentine’s Day on the ship is honestly not that bad,” Tehya, from Australia, told the PA news agency.

“The crew have treated us, not only today but every other day, so incredibly well. They have really gone above and beyond to make today special for us all.”

The 18-year-old, who chose not to reveal her last name, is sharing a cabin with her grandmother.

Tehya said they are not allowed out of their room except for hour-long walks on the open deck and crew members wear gloves and masks when handing out food – while passengers have been told to regularly wash their hands and sneeze into their elbow or a tissue.

“Every day this is reiterated to us always by the captain’s announcements,” she said.

“The strict hygiene measures have stayed the same for Valentine’s Day.”

British honeymooner Alan Steele was diagnosed with coronavirus while on the ship and transferred to a Japanese hospital last week, leaving his wife Wendy Marshall Steele on board.

“Counting down the days until we see each other.”

Mr Steele said he tested negative for the disease this week and will be released from the hospital if he passes another test.

David and Sally Abel, a British couple aboard the ship, said on Thursday passengers have been given the option to leave and continue their quarantine ashore if they test negative for coronavirus, adding that they have decided they will return to the ship.

The couple, who are celebrating their 50th wedding anniversary, told ITV’s Good Morning Britain they fear being separated if only one of them tests positive for the virus.

Mrs Abel said: “My biggest fear is we are going to be tested in the next couple of days because of our age… We have been together 50 years and, if one of us is infected and the other one isn’t, we will be separated.”

In China, the number of deaths from coronavirus has reached 1,380, with more than 63,000 recorded infections, in figures announced early on Friday morning.

The Department of Health said on Thursday that 2,521 people in the UK have been tested, of whom 2,512 were confirmed negative and nine positive.