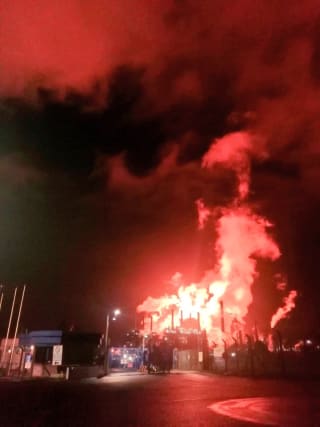 Bosses at ExxonMobil have apologised after “intense flaring” at a Fife chemical plant sparked alarm in the community.

Many residents took to social media to complain about the flares from the Mossmorran plant near Cowdenbeath, which could be seen for miles on Thursday night.

One Twitter user in Edinburgh described it as being “as bright as streetlights”, despite being 12 miles away.

ExxonMobil said the flaring was part of work to restart operations at the ethylene plant, which has been closed since last August for maintenance work.

A spokesman said: “Yesterday evening we deployed our elevated flare as part of our ongoing work to restart our operations.

“This process is completely safe and controlled, and our team worked to reduce both the size and duration of the flare as quickly as possible.

“We exited the flare later in the evening following the safe completion of our work.

“We apologise to communities for any concern that this may have caused.”

Cowdenbeath councillor Darren Watt tweeted that “the flaring was the most intense I’ve ever seen”.

The company last year announced a £140 million plan to reduce flaring and improve infrastructure at the plant.

In August, Sepa varied the operating permits for ExxonMobil Chemical Limited and Shell UK Limited, which shares the site, requiring them both to address the impacts of flaring and install noise-reducing flare tips.

In a statement on Thursday, Sepa said: “Sepa is aware of fluctuations in the elevated flare at Mossmorran as part of the final stage of the facility restart and specialist officers continue to monitor.

“We’re working hard to address the root causes of ‘unacceptable flaring’, making flaring an exception rather than routine.

“The short and medium-term investment we’re requiring the operators to make, from noise reducing flare tips in 2020 and 2021 and planning, designing then delivering new ground flare capacity, will make a real difference to local communities.”