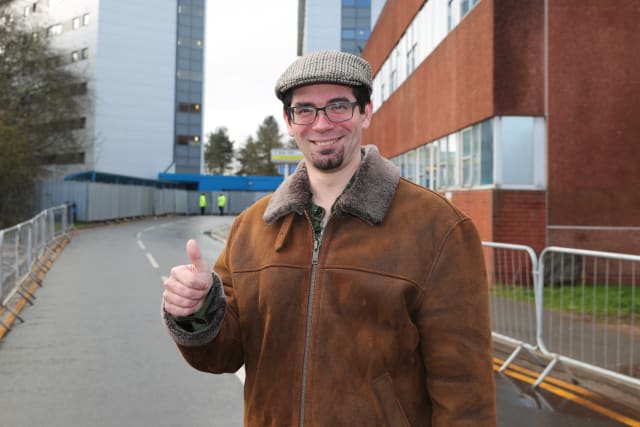 A man who has been in quarantine for two weeks shouted “We’re free!” as he left isolation after testing negative for coronavirus.

Matt Raw, 38, was one of 83 people allowed to leave isolation at Arrowe Park Hospital, Wirral, on Thursday after being kept at the facility following their return from Wuhan, China.

He raised his fist as he was let out through locked gates surrounding the apartment block where he has been staying and said: “We’re free … and the sun’s shining.”

He said he was “ecstatic” that he, his mother Hazel, 75, his wife Ying, 38, and all of the others who had been on the evacuation flight to Britain with them tested negative for the virus.

He said: “It is absolutely lovely to be out and I’ll no doubt be going out for a pint a little bit later.”

He said he planned to return to his home in Knutsford, Cheshire, put the heating on and feed the goldfish.

Mr Raw said books and board games had been donated to the facility by members of the public to keep them entertained during their fortnight stay.

“The wonderful, wonderful staff of the NHS, they have really done their very best to make us as comfortable as possible,” he said.

“We’re not prisoners. They’re trying to make us feel like, if anything, we’re just on holiday for a couple of weeks, maybe without the swimming pool.”

Mr Raw said his mother, who has dementia, was one of the first to leave on Thursday and had gone to stay in a care home for a couple of weeks.

He said: “She’s not really totally aware of where she is and what’s happening but she’s certainly enjoying all of the attention to a degree.”

Two buses carrying people who had been in isolation left the hospital on Thursday afternoon.

A small number of people, who arrived from China on a later flight, remain at the hospital and are due to go home at the weekend.

Dr William Welfare, interim deputy director for health protection at Public Health England North West, said: “We would like to thank all of those who have been staying at Arrowe Park for their patience and support over the last two weeks.

“All the test results from flight one have come back negative so we can be very clear that all of those leaving today do not pose risk to the wider public.

“We’re delighted they’re leaving and they’ll be able to continue with their normal lives.”

Dr Kieran Murphy, deputy medical director for NHS England in the North West, said: “I think it’s been great to see how everyone across Wirral has stepped up to the plate to help our guests from Wuhan and China.”