Shock in Northern Ireland at sacking of Julian Smith 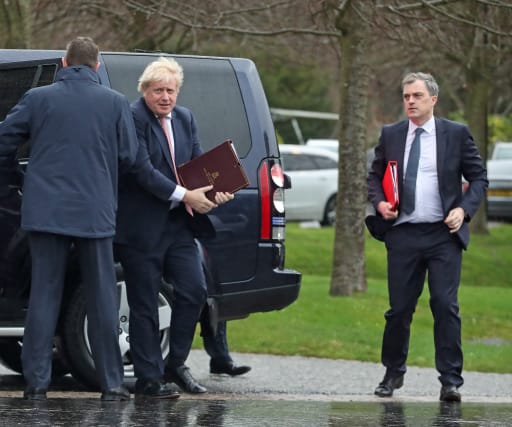 The sacking of Northern Ireland Secretary Julian Smith has been branded “disastrous” and a “WTF” moment.

The move comes after the former chief whip’s success in delivering a power-sharing deal in the fragile region, which saw the Northern Ireland Assembly restored after three years of deadlock.

Allies of Mr Smith told the PA news agency they were shocked at the decision to dismiss him from the Cabinet.

The move to axe Mr Smith came as Prime Minister Boris Johnson carried out a reshuffle of his top team.

Downing Street reportedly felt left out of the loop over the terms of the deal Mr Smith was negotiating last month, which eventually led to the Assembly functioning again after a three-year suspension.

There are concerns in Tory circles that the agreement includes an investigation into alleged crimes by British soldiers during the Troubles.

But those close to Mr Smith insisted that Number 10 and the Prime Minister had been kept fully informed about the terms of the Stormont arrangement.

“There was a write-round of Cabinet ministers,” a source said, pointing out that Mr Smith travelled back from Belfast on January 6 to personally brief Mr Johnson.

There had been a series of memos sent back and forth between Mr Smith’s team and Number 10 and it was “absolute crap” to suggest they had been blindsided.

The reaction in Northern Ireland to the news had been “WTF”, the source added.

First Minister Arlene Foster, leader of the DUP, praised the outgoing secretary of state for his “incredible” dedication.

“Spoke with Julian Smith a short time ago to thank him for his help in getting devolution restored,” she tweeted.

“We may not have always agreed (we did sometimes) but his dedication to the role was incredible. Best wishes to him and his family. Always welcome in Fermanagh.”

SDLP leader Colum Eastwood had harsh words for the PM, calling the sacking a “strategic error” by the Conservative Party leader.

Thanking Mr Smith for his work since being appointed in July, he said: “It defies belief that, after the successful restoration of power-sharing following a three-year collapse, Julian Smith’s reward is a Cabinet Office P45.

“It tells you all you need to know about Boris Johnson’s attitude to the north that he would sack the most successful secretary of state in a decade. He is at best indifferent.”

Mr Adams called for Mr Johnson to “see sense” and reappoint Mr Smith to the role.

“We have not seen an excellent secretary of state that knows the needs and wants from both sides of the divide since Mo Mowlam,” he said.

“We have no doubt if he can unite victims of historical abuse and deliver in the manner that he did, he can solve a lot of issues in this country.

“Stormont faces a rocky road ahead and to sack the architect of the New Deal, New Decade would be disastrous.”