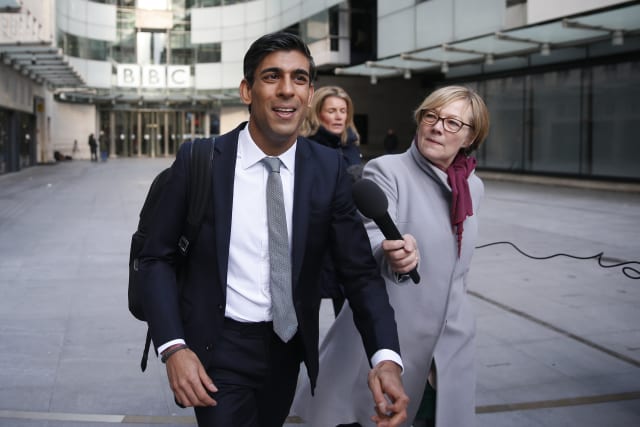 The City reacted with cautious optimism to the promotion of Rishi Sunak to the position of Chancellor of the Exchequer.

The pound initially dipped as reports filtered through that Sajid Javid had quit after being told to sack all his advisers and form a “team” with Number 10.

But as Mr Sunak’s name started being floated, and eventually confirmed, the pound ticked up as investors hoped the appointment would be the start of increased spending.

Neil Wilson, chief market analyst for Markets.com, said: “Boris Johnson is taking the Kirstie Allsopp approach to how to make Number 10 and Number 11 work for him: that is, just knock through.

“The fiscal floodgates are about to open – whatever brake the Treasury might have had on Number 10 has been cut entirely with this move.”

Prior to the announcement that Mr Javid had quit, a pound was worth 1.298 dollars.

Mr Wilson added: “This is a blatant power grab by Boris (Johnson) and (Dominic) Cummings over the Treasury – and it comes barely a month ahead of the first post-election Budget.

“On first glance, I think this means purse strings are being loosened.

“Spending will be dictated by political needs and necessity, rather than the Treasury acting as a brake on political giveaways.

“We know Boris has a predilection for the big infrastructure projects and we also know his plans to level up with spending on the North and Midlands.”