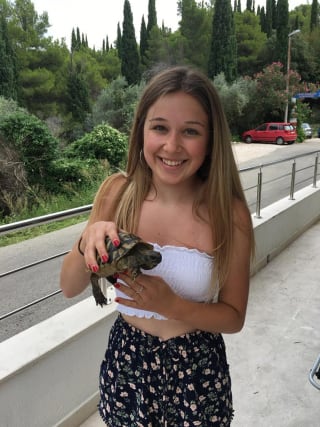 A petition started by friends of a murdered schoolgirl calling for self-defence classes to be part of the curriculum has reached 10,000 signatures.

Thomas Griffiths, 18, stabbed Ellie Gould, 17, to death at her home in Calne, Wiltshire, then arranged the scene to make it appear as though his ex-girlfriend had inflicted the fatal wounds herself.

He pleaded guilty to murder and was jailed for 12 years and six months at Bristol Crown Court in November.

A petition set up by Ellie’s friends, calling for self-defence classes in schools, has now been signed by more than 10,000 people.

It is being supported by Conservative MP James Gray, who represents North Wiltshire.

“A few of Ellie’s friends have been very active and have come to see me several times to try to make positive things happen as a result of Ellie’s tragic murder,” Mr Gray said.

“Their suggestion that some element of self-defence training should be in all schools is a great idea and I agree with it.

“I think if we can find a way of working self-defence training into PE, that has an obvious advantage.

“I am in discussion with self-defence instructors in the area to see how we can take it forward.”

Mr Gray said the lessons would not have to be a lengthy course as just a few basic self-defence techniques could be beneficial.

The petition should receive a response from the Government now it has reached more than 10,000 signatures.

Writing on the petition, on Change.org, Ellie’s friends called for one or two self-defence classes to be taught in schools each year.

They launched the campaign ahead of February 6 – which would have been the keen horse rider’s 18th birthday.

“As a group of young sixth-form students, we are aware of how stretched the education budget is and this is why our demands are not unrealistic,” they said.

“Alongside Ellie’s family, we have come up with the idea of introducing self-defence classes into the physical education curriculum. This saves schools from having to pay external instructors to come in.

“It would mean, instead of playing netball or football, pupils could partake in one or two basic self-defence classes a year, therefore developing their skills without taking up hours of lesson time.”

They said the classes would benefit potential victims of murder, but also offences such as rape and mugging too.